Soldering, I love it! I have a few irons for different jobs. But can two of the cheapest Branded soldering irons from CPC (part of the Farnell Family) be useful? There is only one way to find out!

So what triggered this test? 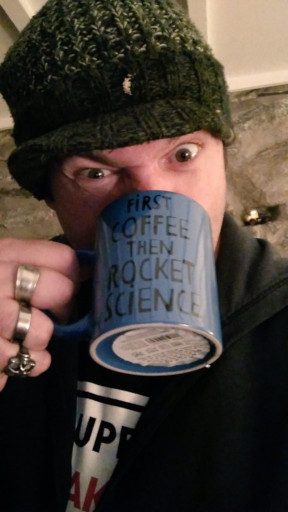 Well it was a who, rather than what. I was having a chat with Jo Hinchcliffe about cheap soldering irons for workshops. He mentioned about two irons he saw on the CPC website and I said that perhaps I should write a blog post...and here we are.

I chose the two irons from CPC and also bought something else for a future project ;)

To clarify, these soldering irons were bought using money kindly donated by readers such as yourself via my Ko-Fi page, and no-one at CPC has been involved in this blog post.

So what did you buy?

I bought these two soldering irons

Bought from CPC for £4.50 including VAT.

Bought from CPC for £3 including VAT

Both are identical despite coming from different suppliers.

They have a hard black plastic body with a rubbery yellow sleeve providing grip.

The mains cable is rubber and provides around 1 metre of flex. But the cable is quite firm so ensure that the workspace is clear otherwise things will get knocked over. 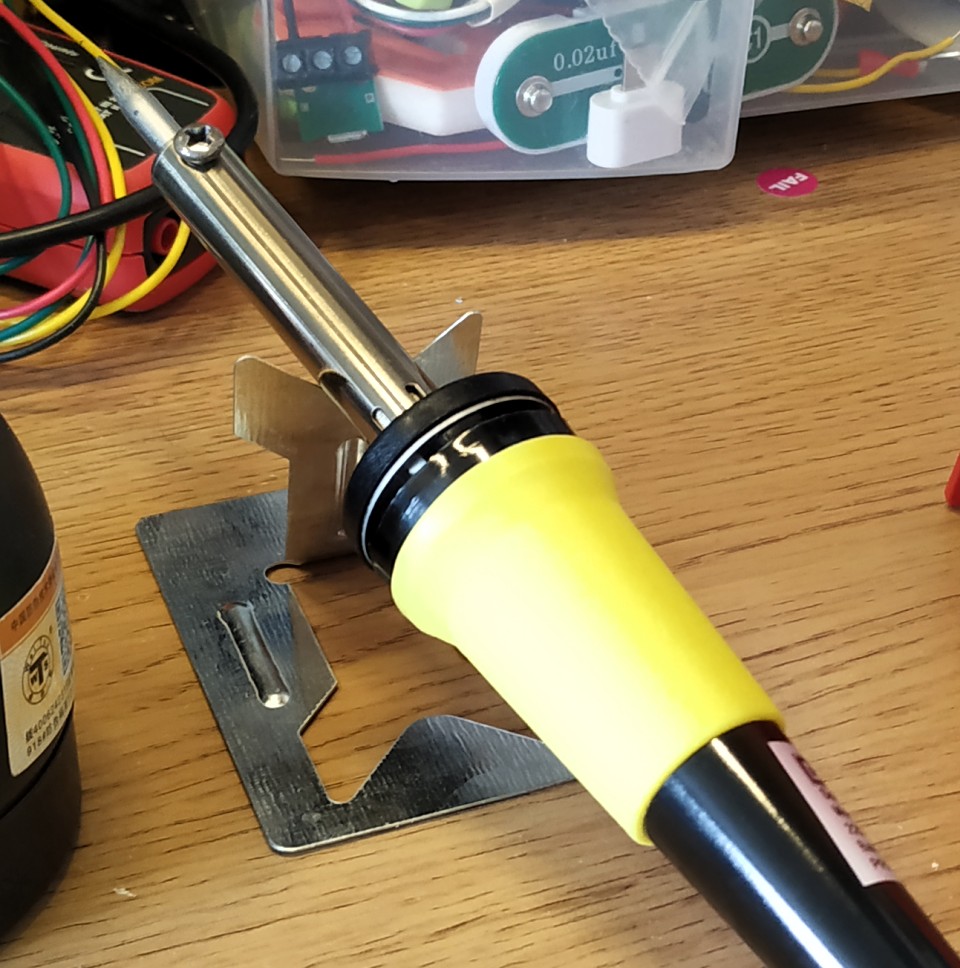 The 25W iron comes with a small folding stand, sadly the 40W does not. 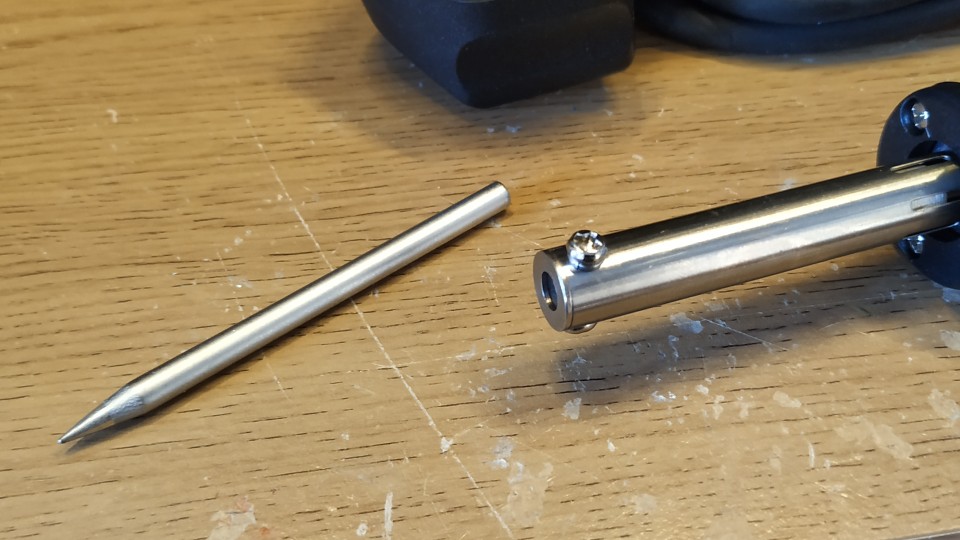 Both are not temperature controlled, so will work at full power when plugged in to 220-240V AC (UK mains). 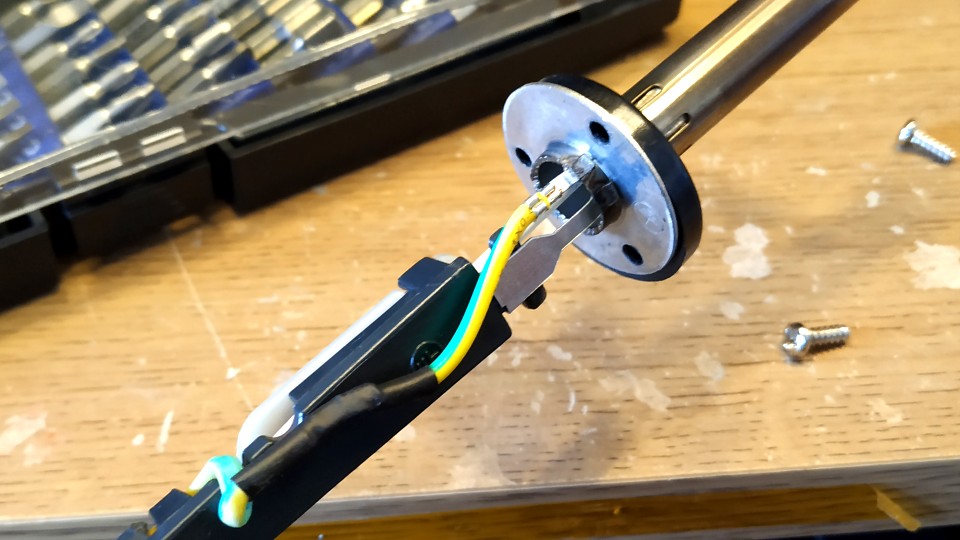 The irons run at mains (240V) voltage so please be careful. Inside we see the live and neutral wires connected to the heating element, and an earth wire is connected to the metal parts of the iron. I also tested the earth connection to the mains plug and all was as it should be for both irons.
To get access to the internals a tri wing screwdriver (Y1) is required, not common but easy to get hold of.

So how did I test? 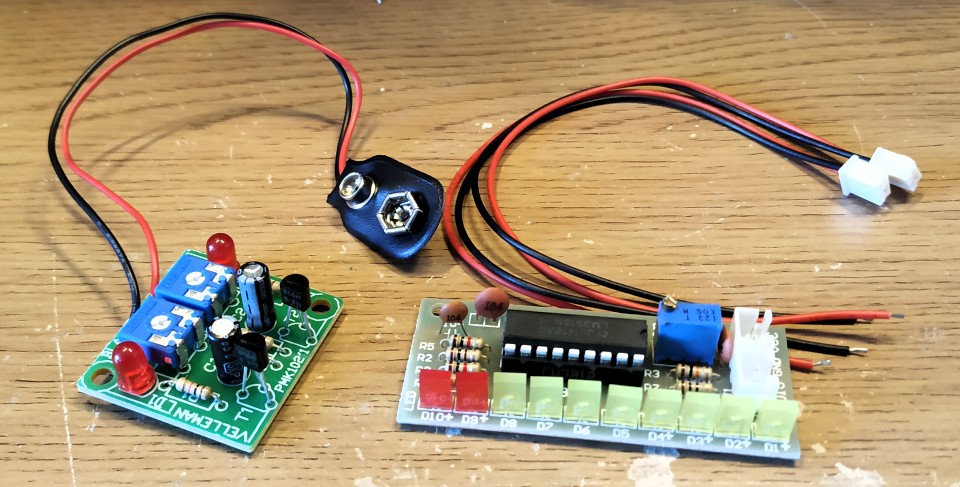 I have a couple of kits (well ok I have about 10 kits) in my bits box which I use to practice soldering. On the left of the image above is a Velleman Flashing LED kit, on the right is a Chinese kit bought from ABX Labs. To put each iron through their paces I built a kit with each iron. So here we go! 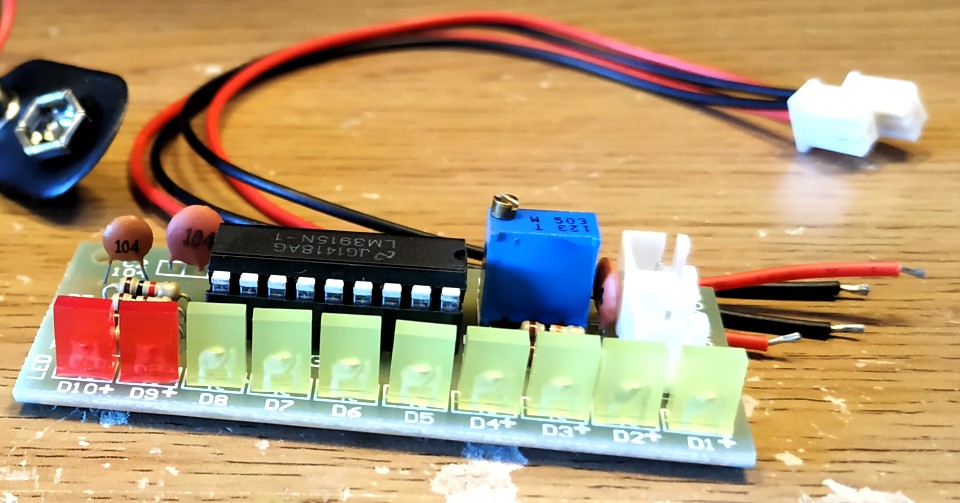 I plugged in the iron, placed it on the stand and left it for 3 minutes to heat up. After the time had elapsed I touched some lead solder to the iron and it melted. I tinned the iron and set to work!
The start with this iron was not great, one person on Twitter commented that the soldering was sub par. 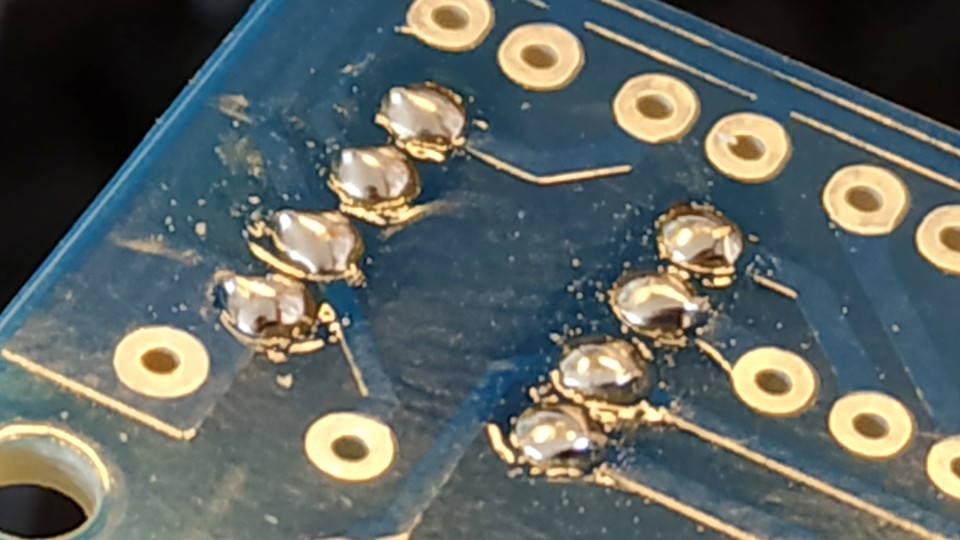 They were right. My first few attempts were a bit scruffy, largely due to the size of the soldering iron tip. 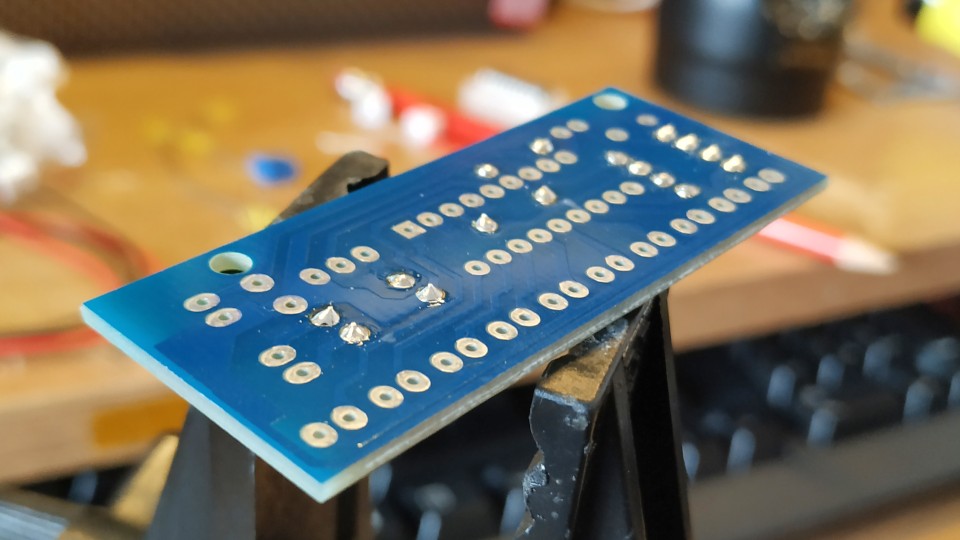 But things did improve as I got used to the tip.

My Lm3915 audio kit has been built. Currently playing an MP3 from another board. pic.twitter.com/dbsEV9EQWz

I managed to complete the project and I was largely satisfied with the result. 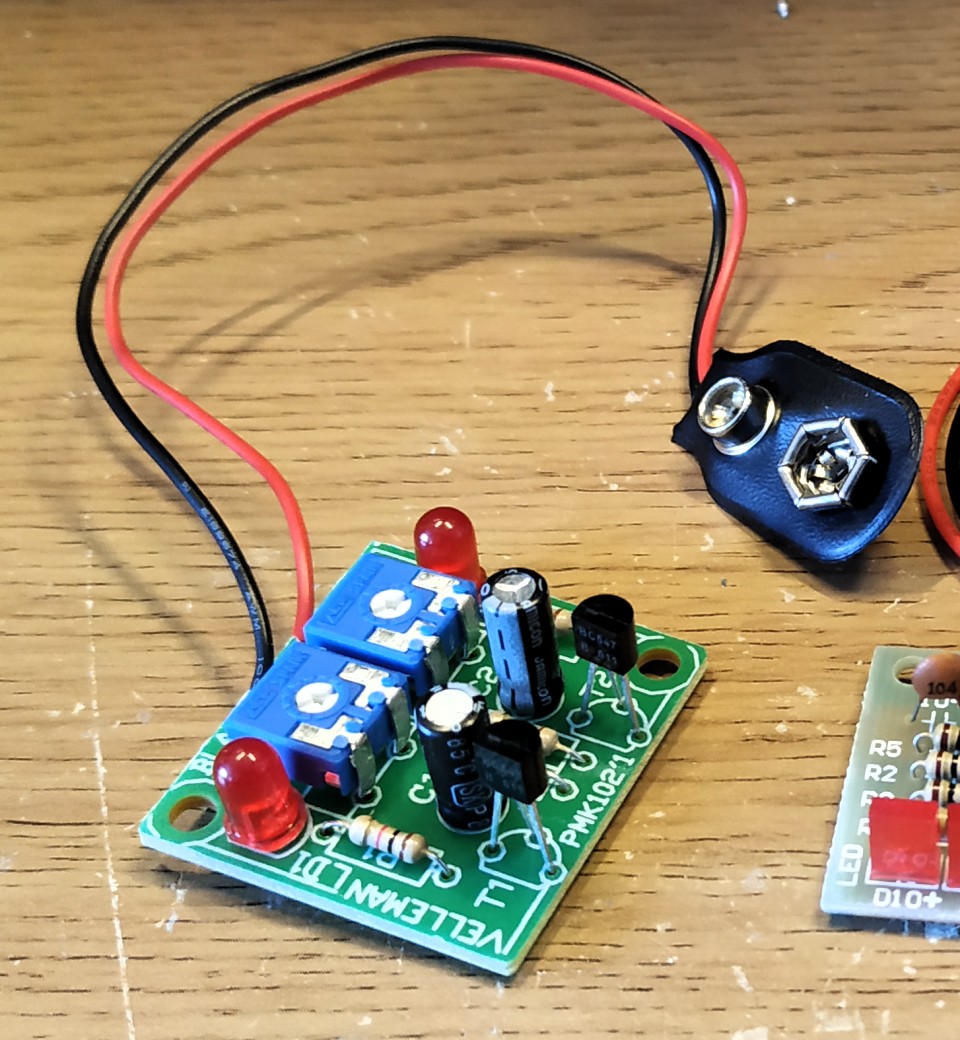 Who doesn't love flashing LEDs!?
I plugged in the iron, placed it on the stand and left it for 3 minutes to heat up. After the time had elapsed I touched some lead solder to the iron and it melted. I tinned the iron and set to work!
Soldering the Velleman kit was great, lovely instructions and so easy to follow. 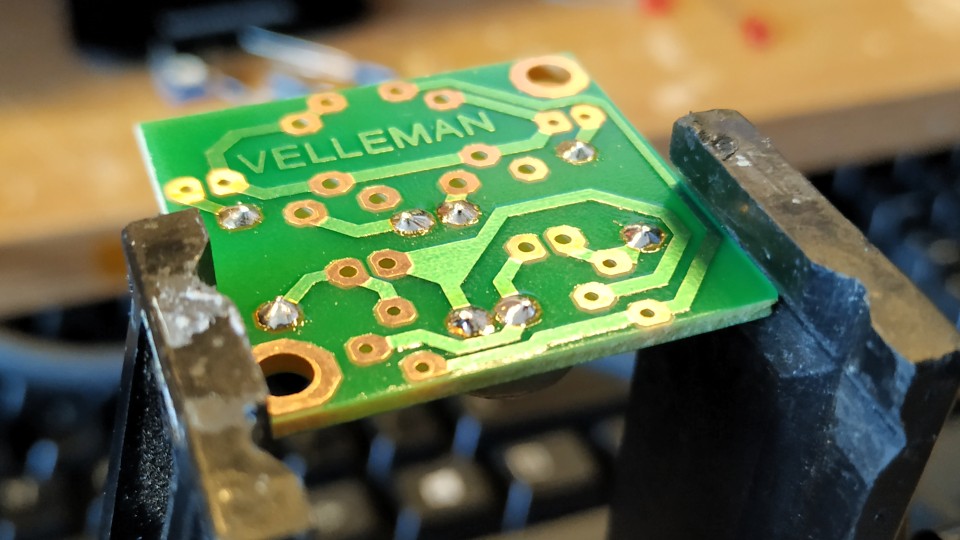 The 40W iron has the same tip as the 25W so I was already familiar with how it felt. So my joints were a lot neater. 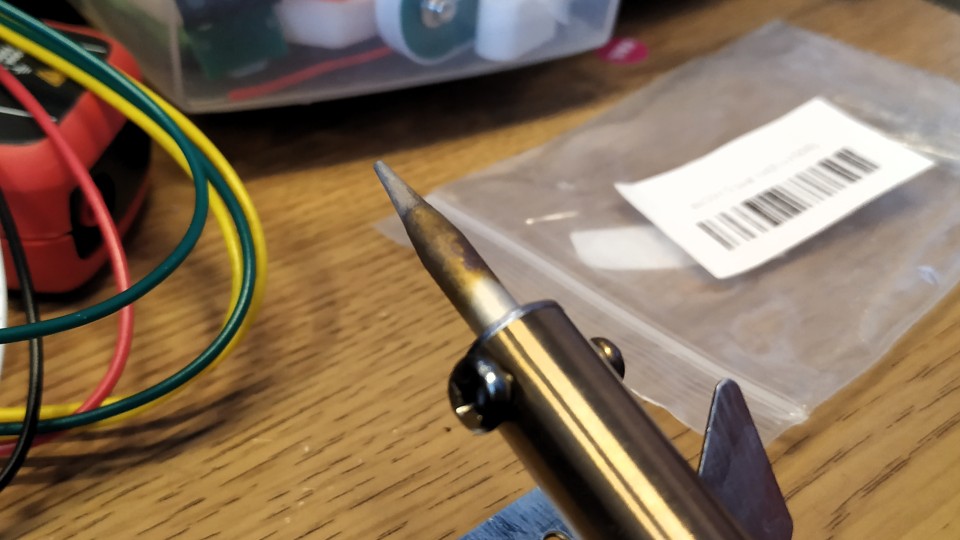 But I noticed that the tip of the 40W soldering iron was growing darker as I soldered. This is common for old soldering irons, but a fresh new iron with 20 minutes of use should not be this bad. 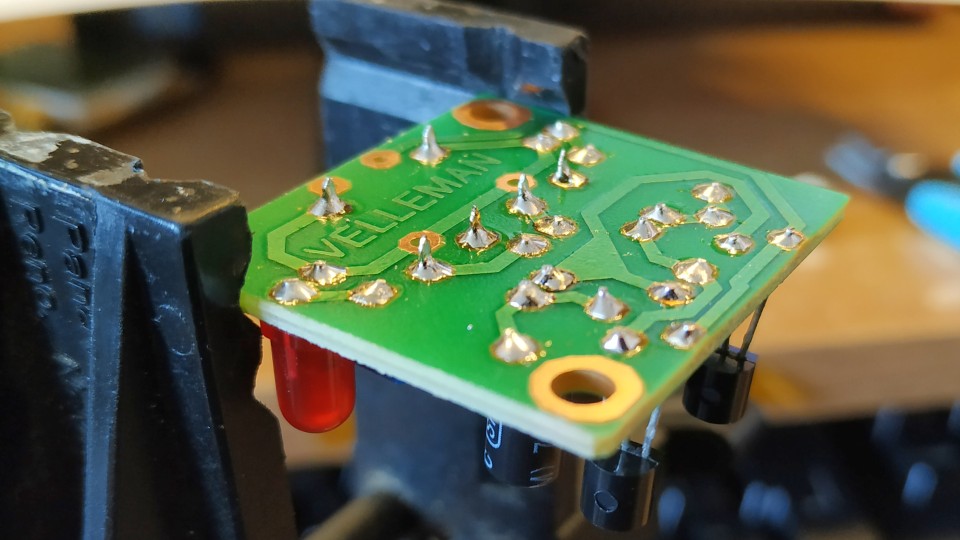 I soldered on and finished the joints.

I was happy with the soldering and the kit worked. But I wasn't happy about the tip. It will not last long!

The 25W soldering iron was the most expensive at £4.50 including VAT. But it has enough power for hobbyists to solder up their projects and the tip of the iron should last longer than the 40W version, which is £3 (£1.50 cheaper) but you are advised to put your money into the 25W version unless you really need a full 40W of power. 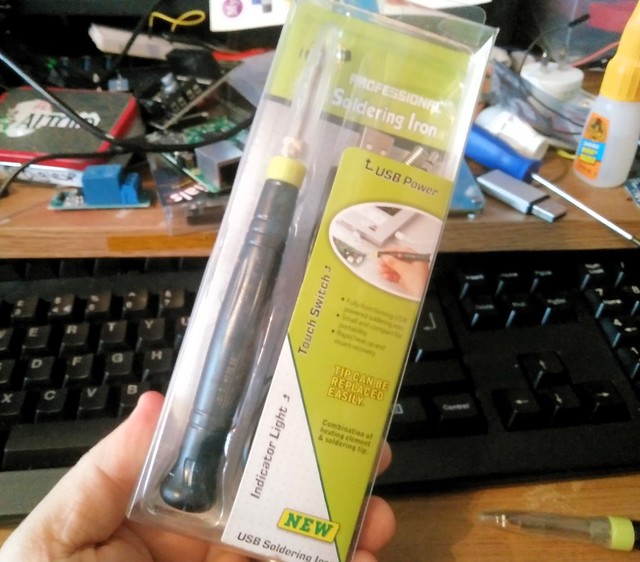 I use a USB soldering iron. These are great for kids as they are small, heat up quickly (<20 seconds!) and cool down quickly (2 minutes). They are also around £5 on eBay 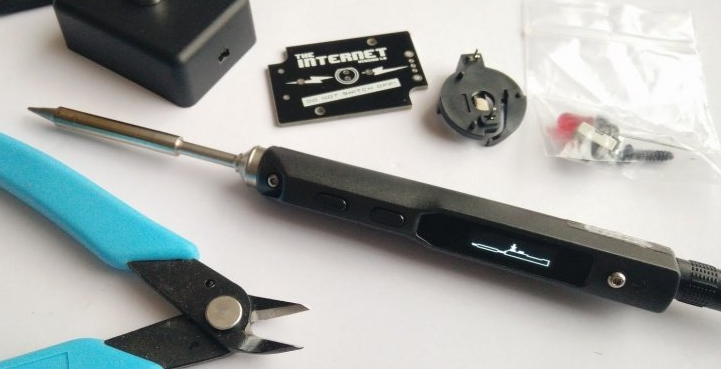 I use a TS100 soldering iron. I can set the temperature to ensure that I do not damage any components. I bought it from Banggood in 2018 for around £40.

Super tiny neopixel LEDs from Aliexpress, but are they any good? I took the hit for you!

Need to upload a file for use in a project? Don't want to faff with Dropbox, Google Drive, servers? Try Filestack, it might just save you some time.