Ubuntu on a phone?

I've been a Linux user since I discovered Corel Linux in 1999. Since then I have distro hopped, a term used to describe trying out yet never settling on one particular operating system, from Red Hat, Suse, and eventually ending up for a few years using Ubuntu a Linux distribution (distro) from Canonical.

Canonical have had many attempts to branch out their core business and one of their main attempts was to create a convergence device that brought mobile phone portability yet provided the power needed to run a desktop operating system.

Canonical's attempt was ultimately a failure, although they raised almost $13 Million of their $32 Million goal.

Some of the ideas generated by this project have ultimately filtered down into Ubuntu Touch, but it's not all good news.

The Aquaris E4.5 Ubuntu Edition, retails at €169.90 and is a stock phone produced by bq. This phone has not been created specifically, rather it is repurposed Android phone from their range.

In the hand the phone feels solid enough with no creaking plastic noises audible but it does feel a little too budget. The sharp lines of the phone feel somewhat jarring when compared to the rounded edges of other popular phones in it's price range, Motorola Moto G being a worthwhile comparison. Looking around the phone we can see the ports for dual SIM cards, Micro SD card, headphones and the Micro USB charger. We can also see the volume rocker and power button on the top right of the phone. Booting up takes around 30 seconds and once booted we can see a bright and easy to read screen that has decent colour reproduction, but it does lack a sharpness found in other phones of this price range. Indeed the ppi (pixels per inch) of this screen are only 240ppi, compared to the Moto G 326ppi. 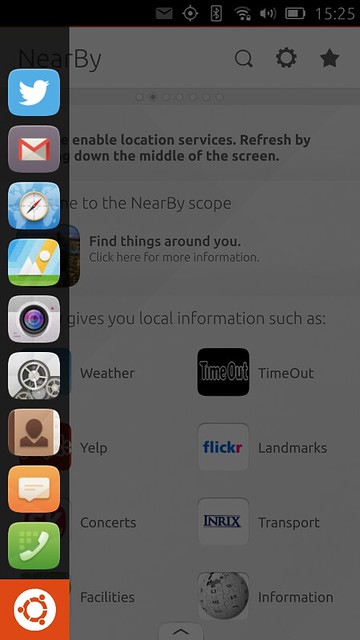 Ubuntu Touch is based upon Ubuntu 15.04 and aims to bring the Ubuntu desktop experience to your phone, but not in the way that Ubuntu Edge promised. Using the phone requires the user to learn a series of gestures, most notably swiping from the left of the screen to the right brings up a menu system similar to the Unity interface used in the Ubuntu desktop. Swiping from the top to the bottom of the screen reveals the Notifications area, which gives you quick access configuration of various wireless connections and audio settings. Swiping from the right to the left of the screen enables you to quickly swap between open applications.

The Ubuntu Touch operating system is rather basic but of course it is still very early days for this project and improvements are ongoing by the team at Canonical and the many community members. We had one issue with the phone and that occurred when we updated the operating system using the software manager application. Subsequent boots took over 10 minutes and in one particular instance we got stuck in a boot loop and it took 20 minutes to boot our phone! Not a nice experience and very worrying when we consider that our phone is now the centre of our work and social life in this digital age. There are still a number of bugs in the operating system and at times it can appear to be rather glitchy and erratic

One area that Canonical is pushing is the use of Scopes to contain relevant apps and information for a given task. For example the Nearby scope provides you with weather, maps, photographs and information of your current location. An interesting feature and still in it's infancy. 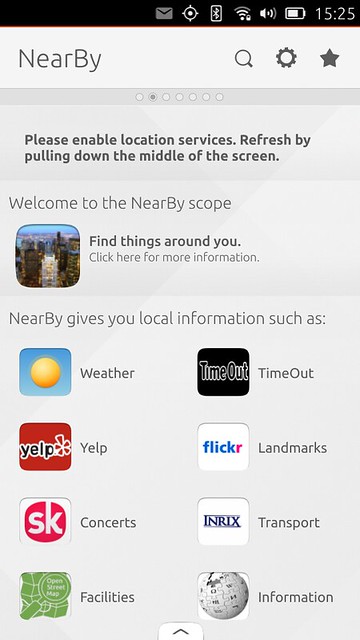 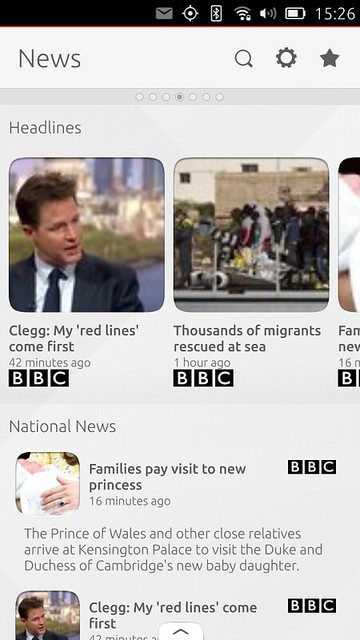 The Aquaris E4.5 comes with a series of applications pre-installed, Cut the Rope, Music, Reminders etc. But popular applications such as eBay, Amazon, Gmail and Twitter are really just shortcuts to mobile implementations of these services, hopefully this can be remedied in the future. Installation of applications is handled via Ubuntu Store, which requires the user to have an Ubuntu One account, which since the closure of the Ubuntu One File Services (cloud storage) this seems like an extra hoop to jump through for little reward as the Ubuntu store has a very sparse selection of applications on offer. 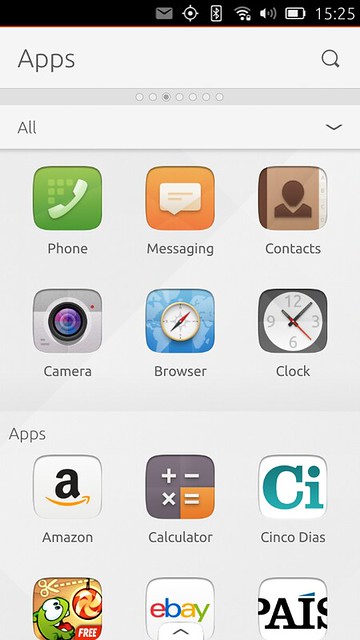 "It's not a phone to choose for it's camera, but it does a fair job in most circumstances."

The rear facing camera is rated at 8MP resolution, and it produces a reasonable image in good light conditions, far better than the Motorola Moto G. The front facing camera rated at 5MP did a good job when taking a selfie for my Twitter avatar. 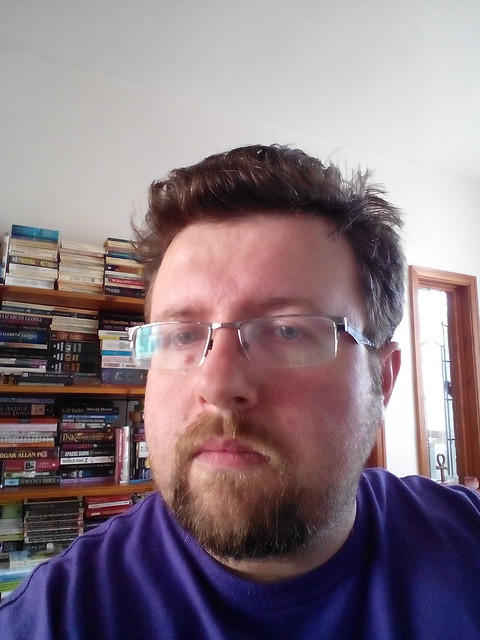 It's not a phone to choose for it's camera, but it does a fair job in most circumstances.

It's not a good score I'm afraid. For a first attempt the software is good and usable but you will quickly exceed the capabilites of the software due to the lack of apps and the rather basic state of the Ubuntu Touch operating system. The hardware is decent enough and provides enough power for most users, but the rather basic feel of the phone does not inspire quality.
Ubuntu Touch looks likely to be relegated to the same league as Firefox OS, an interesting alternative to the mainstream but lacking the apps and big name support that will help it find it's way into the pockets of Jo Public.
Ubuntu developers and enthusiasts will love this device and as a development reference this device is the right price for the right market, sadly for everyone else they will look elsewhere for their next mobile.

"A reasonable phone for Ubuntu to launch with, but the immature operating system and app store means that this device will face an uphill struggle in a market dominated by established big names"

Controlling your Raspberry Pi over a network is a really handy thing to do, but how can you do it? Well in this tutorial I show you how to setup a VNC server

Being British I have an unatural obsession with the weather. In a taxi my opening gambit is usually "Well, isn't the weather nice/wet/cold ?" to which the poor driver responds