Houston, we do not have a problem!

4tronix, makers of robots and kit for all manner of single board computers and micro-controllers have been working tirelessly in the past few years. Their latest project sees another robot added to their line up, but this time it takes on a rather unusual form.

A S I X wheel drive robot designed to look similar to the Curiosity Rover. It is powered by a micro:bit board, and it has a simple set of blocks to control the robot.

What's in the box? 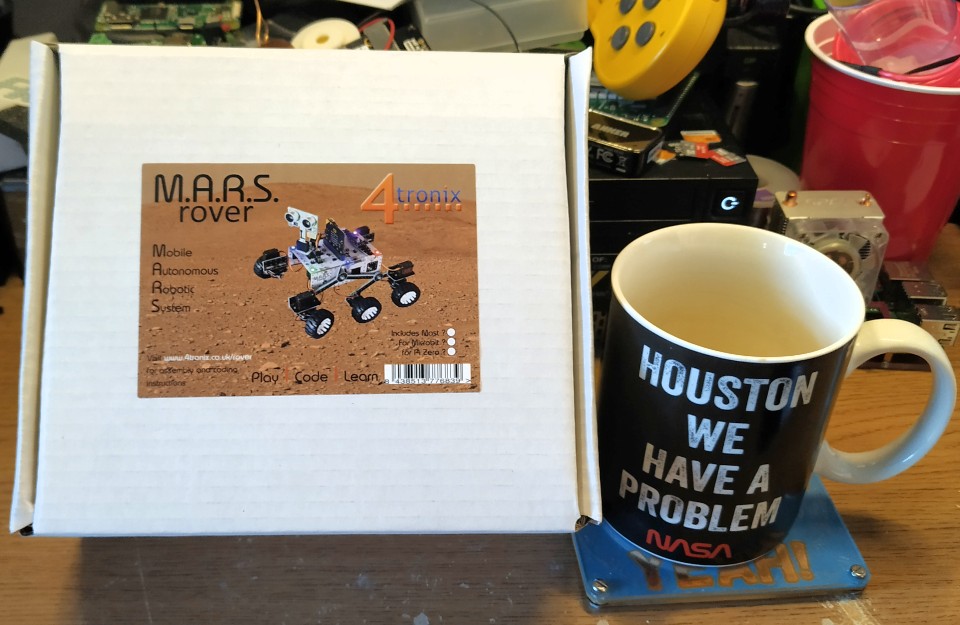 In a rather neat package we get 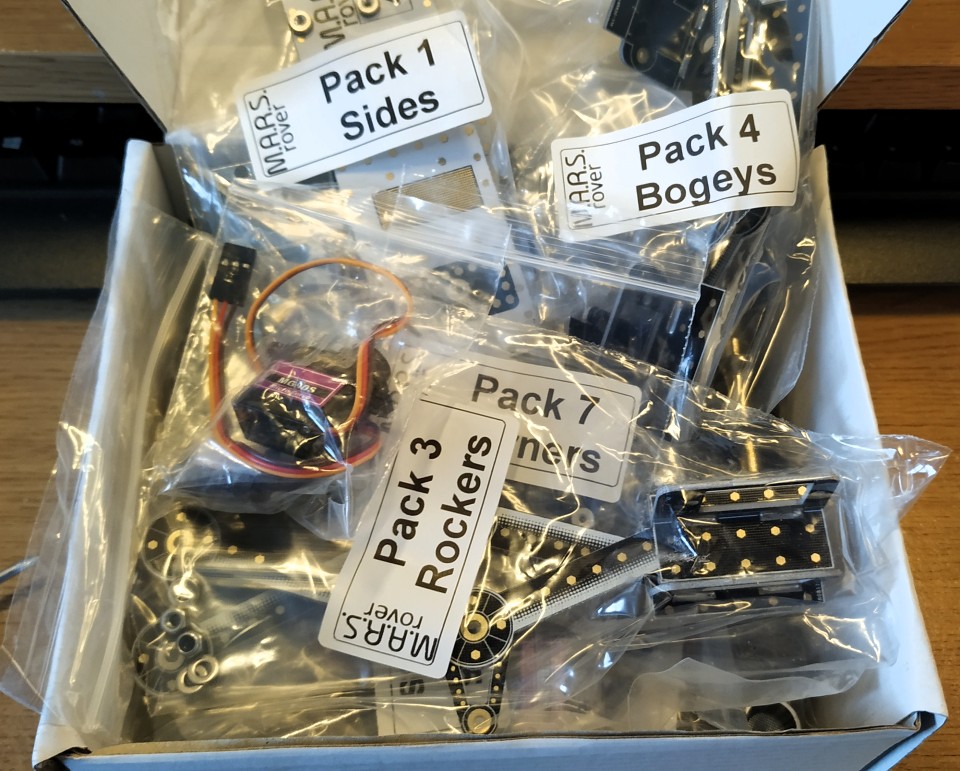 So is it easy to build? 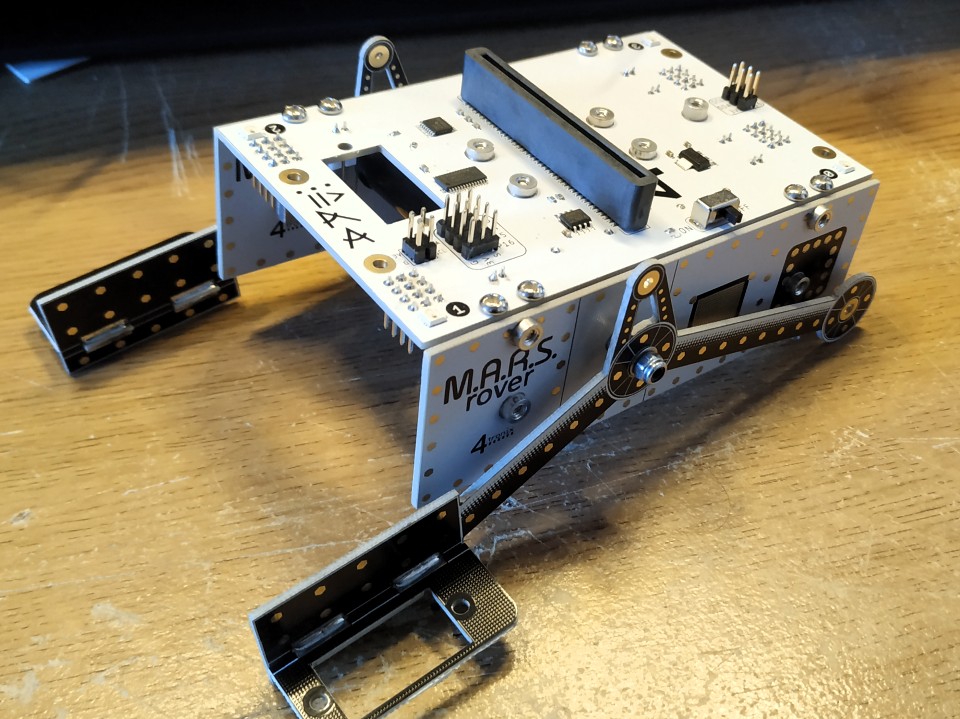 Yup, it takes around 2-3 hours depending on skills and patience. There are a few moments in the build where a third hand / second brain may be required. But for 90% of the build you will have no issues. 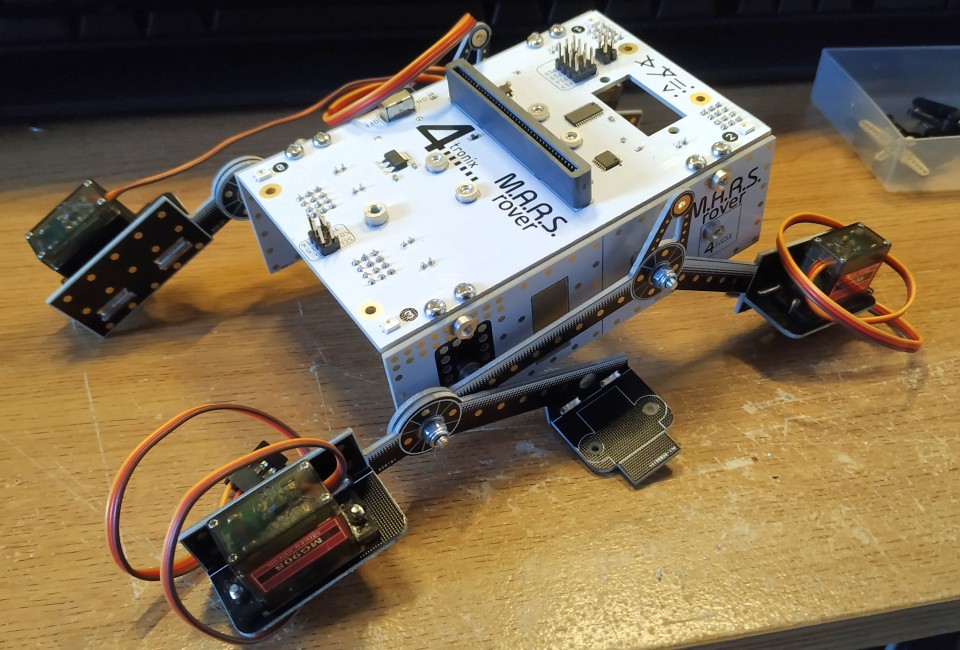 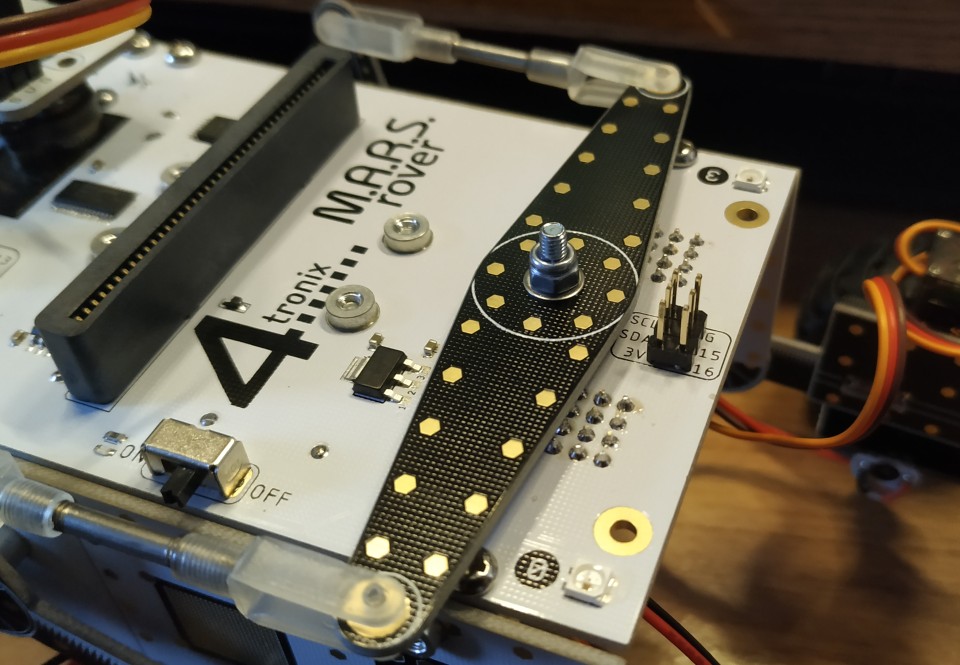 It took me about 3 hours to build, as I made a couple of mistakes, mainly the differential and fitting the motors to each "leg" is rather fiddly. Oh and I was watching Mr Robot too. 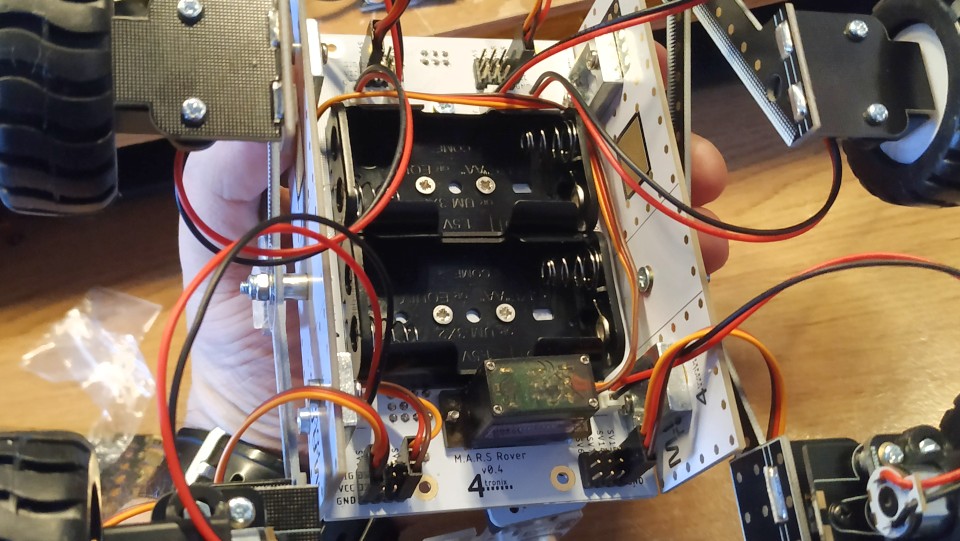 The robot comes as a kit which uses circuit board materials to create a rigid frame. All of the fixings and the appropriate tools are in the box. So all we need is a micro:bit and 4 x AA batteries to power the robot. 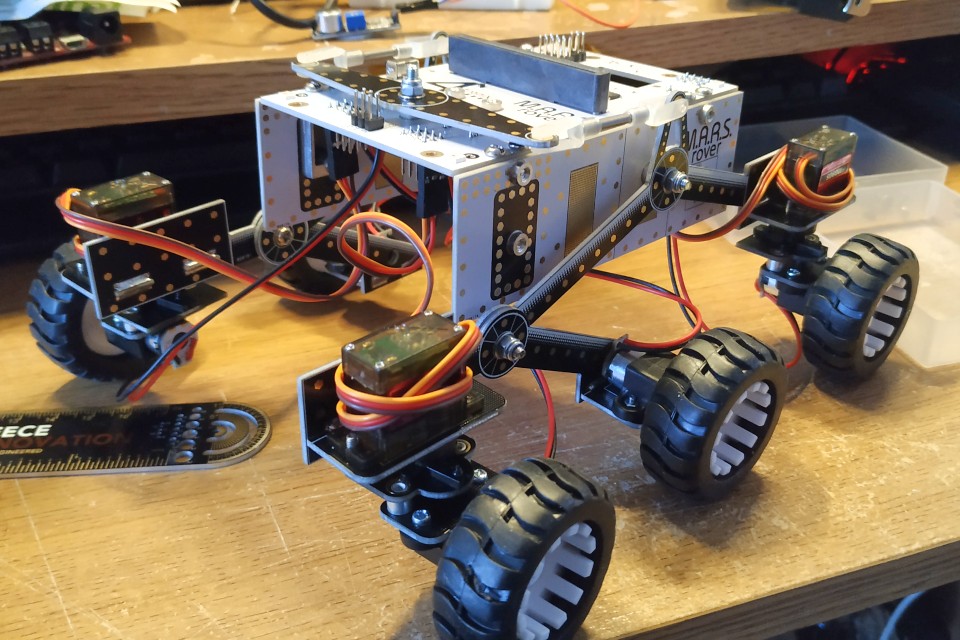 The build involves lots of screwdriver use, no soldering is required as the kit is designed to fix together with screws. 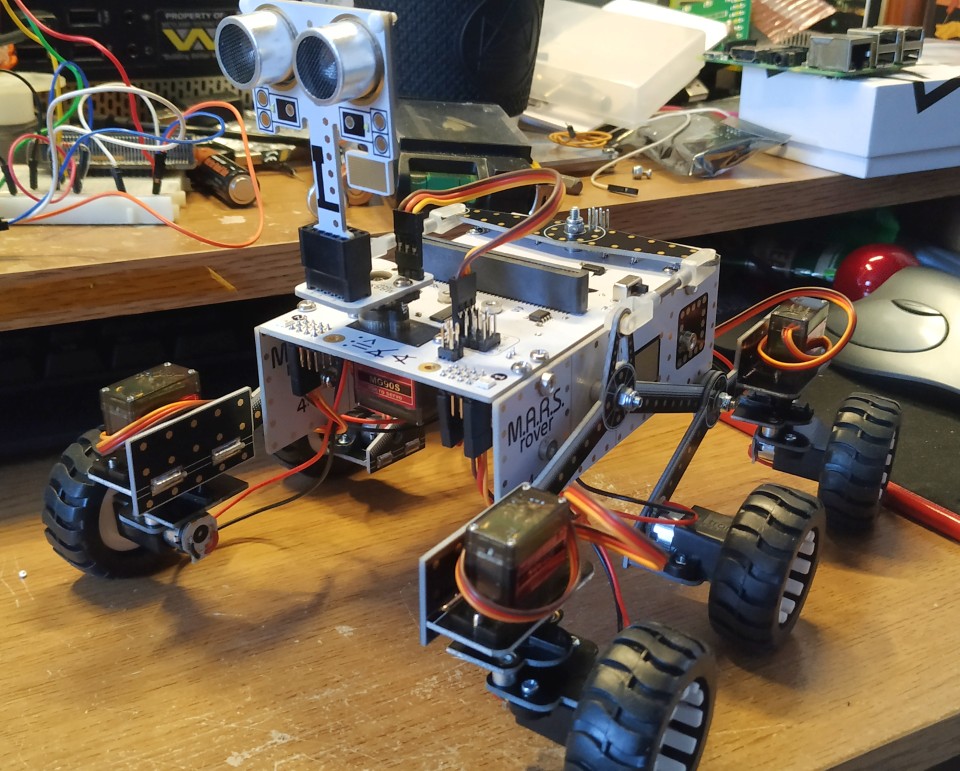 This robot has six DC motors each powering a wheel and these are used for forward / backward / spin movement. They aren't fast, because serious science needs slow speed! The servos are used to create an additional way to turn the robot. Instead of spinning on the spot, the robot will turn in a gentle arc. Also the robot can climbe over obstacles, books, clothes, planets etc. 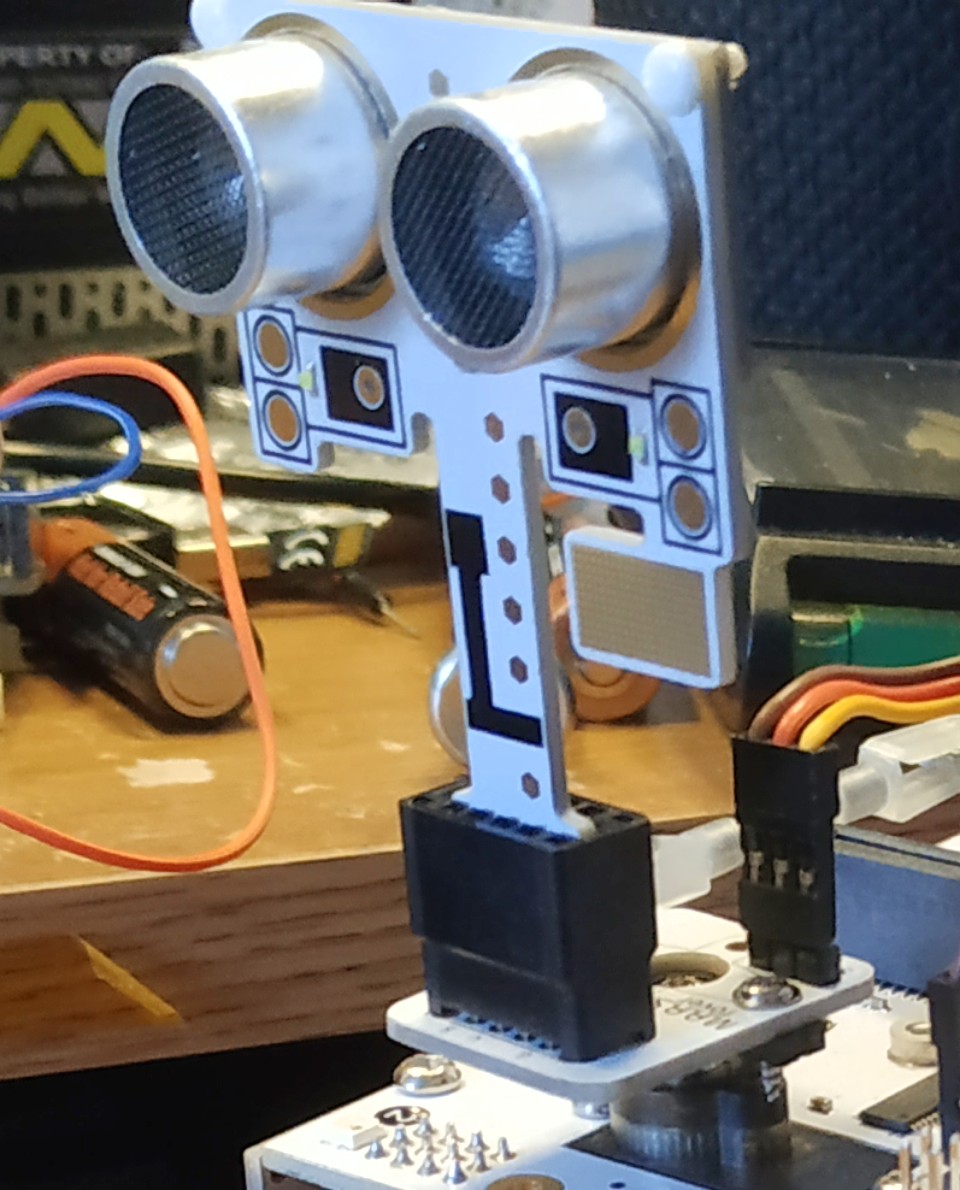 An HC-SR04P (a 3v compatible version of the original HC-SR04) sits atop a neck section at the front of the robot, we can control the neck and the line of sight for the sensor via a servo. The sensor is used to give approximate distances using packets of ultrasound. This means we can programmed the robot to self discover a path around a room, reacting to obstacles and driving around them.

How do I code it?

Right now there is an extension for Makecode, micro:bit's block language. Open a new project, click on the cog in the top right of the screen. Select Extensions and then paste this URL https://github.com/4tronix/MARS-Rover and press ENTER. Then click on the extension and it will be installed and ready for use. 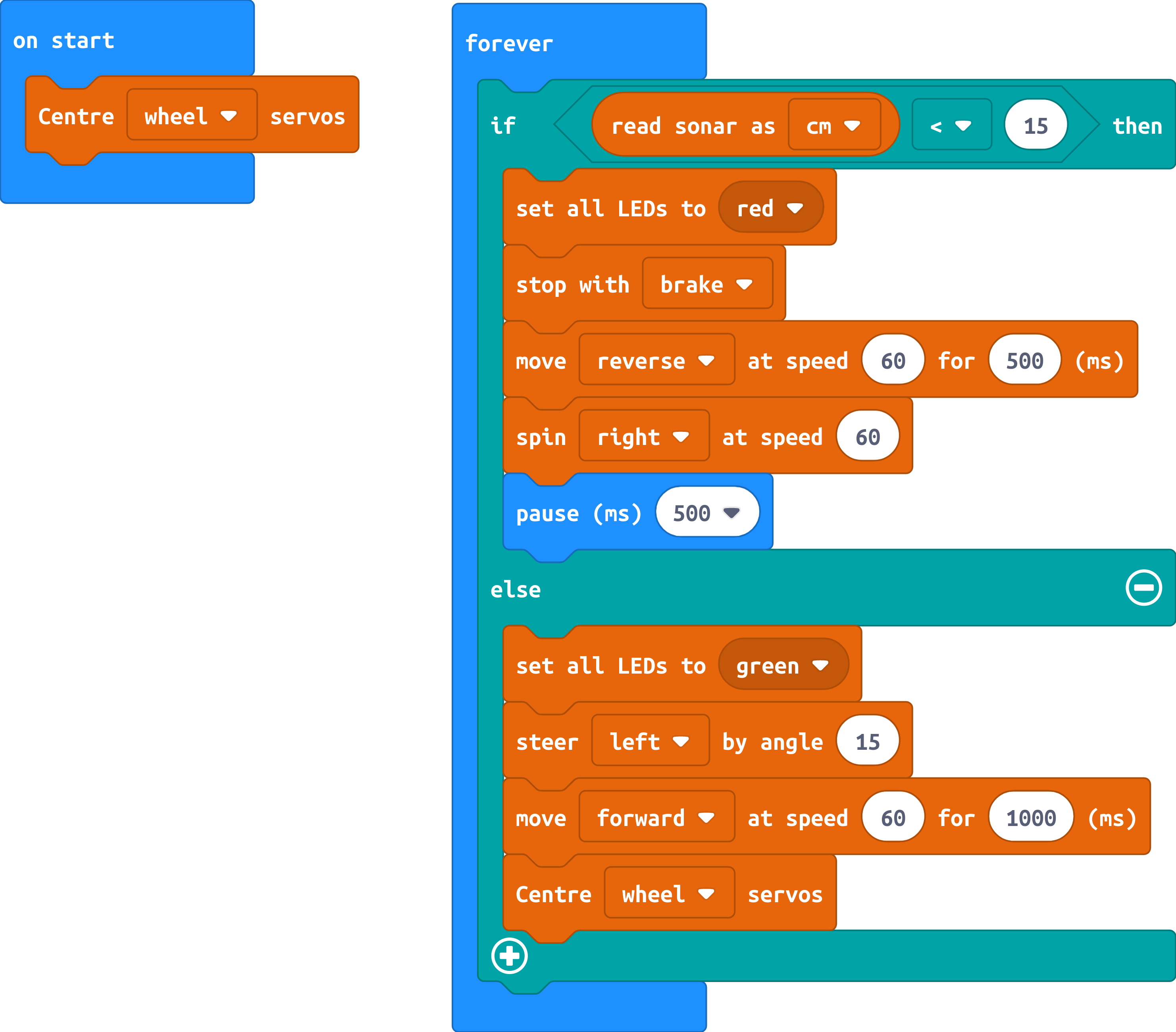 I wrote a simple bit of code that would let the robot, R0g3r, run around my office floor. The code resets the servos so R0g3r points forward. Then inside a forever loop I ask the robot to check the distance from an object and if it is greated than 15 centimeters it will drive forward with green lights on. If it encounters an issue, it will turn on the red light, stop, then attempt to do a "three point turn" to get out of there.

So where do I get one?

From 4tronix! It is £120 inc VAT and that sounds like a lot, and yeah that is a big bit of cash to spend, but with this robot we learn how to build and maintain the robot, how to configure the servos, tinker with the sensors, and create an autonomous robot using a simple block language. In school, a full term in DT / Science and Computing could be built around designing a terrain for the robot to explore, based upon real evidence from ESA / NASA. The children could explore their planet and learn how to overcome any problems with engineering and computing principles.

Great fun to build, sure it has a few fiddly bits, but patience and perseverance pay off with a lovely little robot! The price is a little high, but the amount of components and custom boards designed for the M.A.R.S Rover mean that 4tronix have simplified a rather complex robot.

Need a cheap and easy intro to SMD soldering? Well Christmas might come but once a year, but these trees can be soldered all year round.

A good book can spark the fire of imagination.