For the latest Tooling Tuesday we take a look at a massive tool...Me! 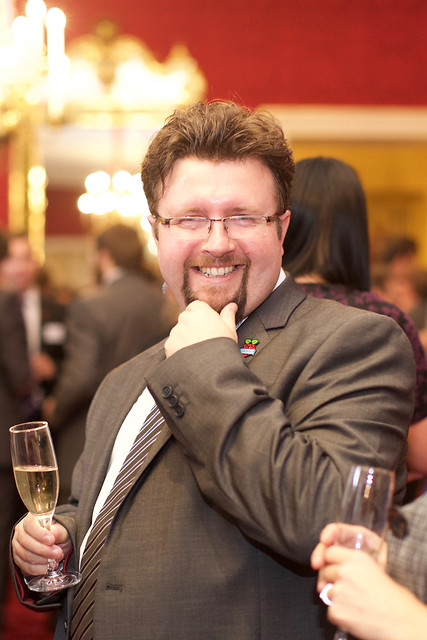 Yeah this is the worst photo of me ever! I look like a Carry On extra! But yeah here is a pic of me at St James' Palace in October 2016 celebrating the Raspberry Pi Community

Les, known as Biglesp or Biggles if you read his Twitter name incorrectly is a middle aged maker who loves tinkering. But did you know I only learnt to code six years ago?

In 2013 I left a role as a project manager for a Python / Django web agency and decided to try my hand at self employment. In the early days it was really hard to find work and for the first few months I would of received more money in benefits than I did from actual paid work. Around this time magazines and teacher training courses were gearing up to help everyone do more with their Raspberry Pi. For example electronics and Python. So I was offered a gig running training for a UK CPD company and I only had a weekend to learn Python (and me being a fool learnt Python 2) and some basic electronics to make LEDs flash! Somehow this worked and for 18 months I ran training courses across the UK. 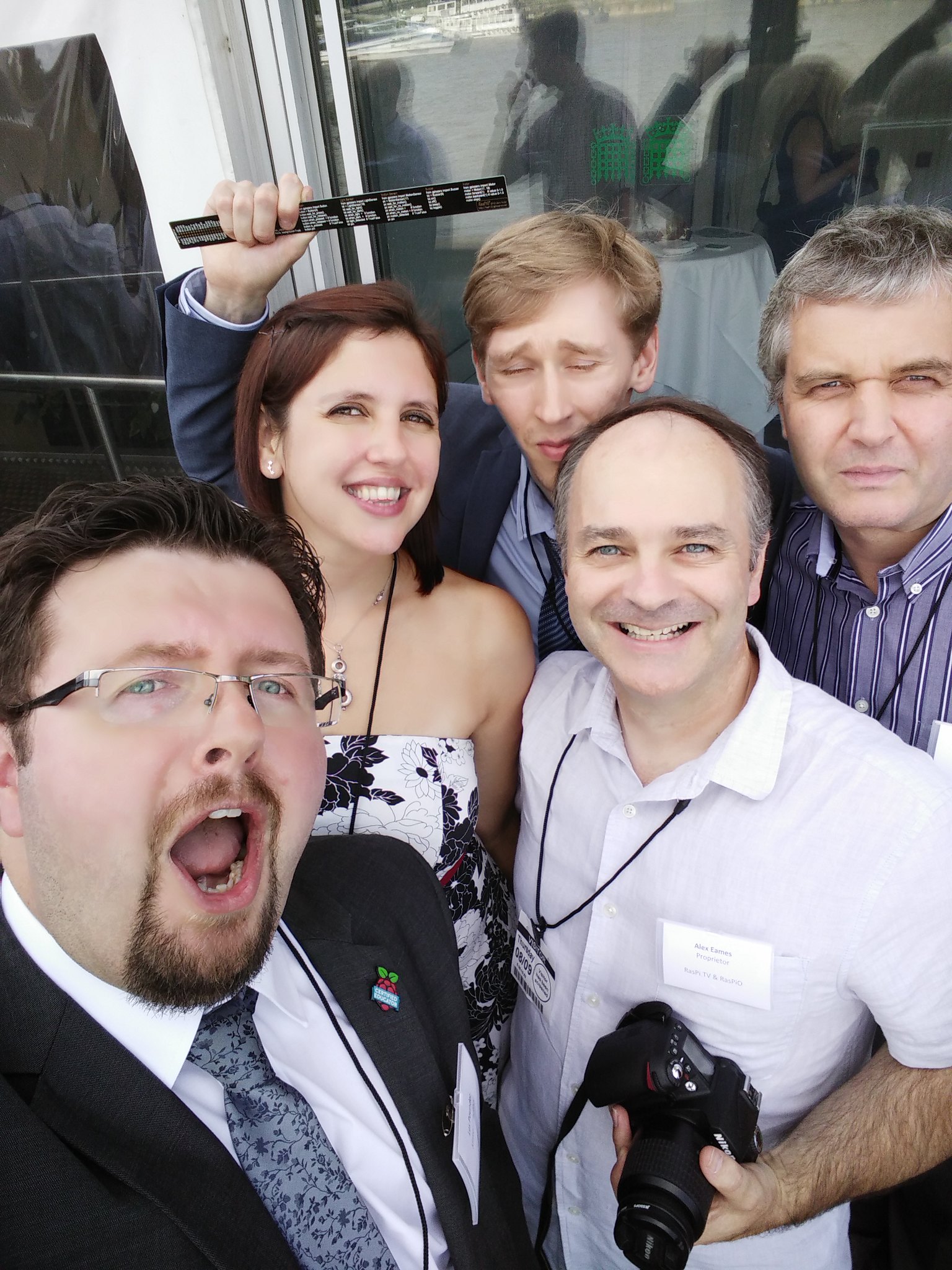 Me, Cat Lamin, Ben Nuttall, Alex Eames, Albert Hickey at the Palace of Westminster celebrating the success of the Raspberry Pi.

Learning to code is something that anyone can try. We may not become a coder / developer / hacker but we can learn a new skill and the logic that if offers. Learning one language also enables further languages to be learnt with ease. 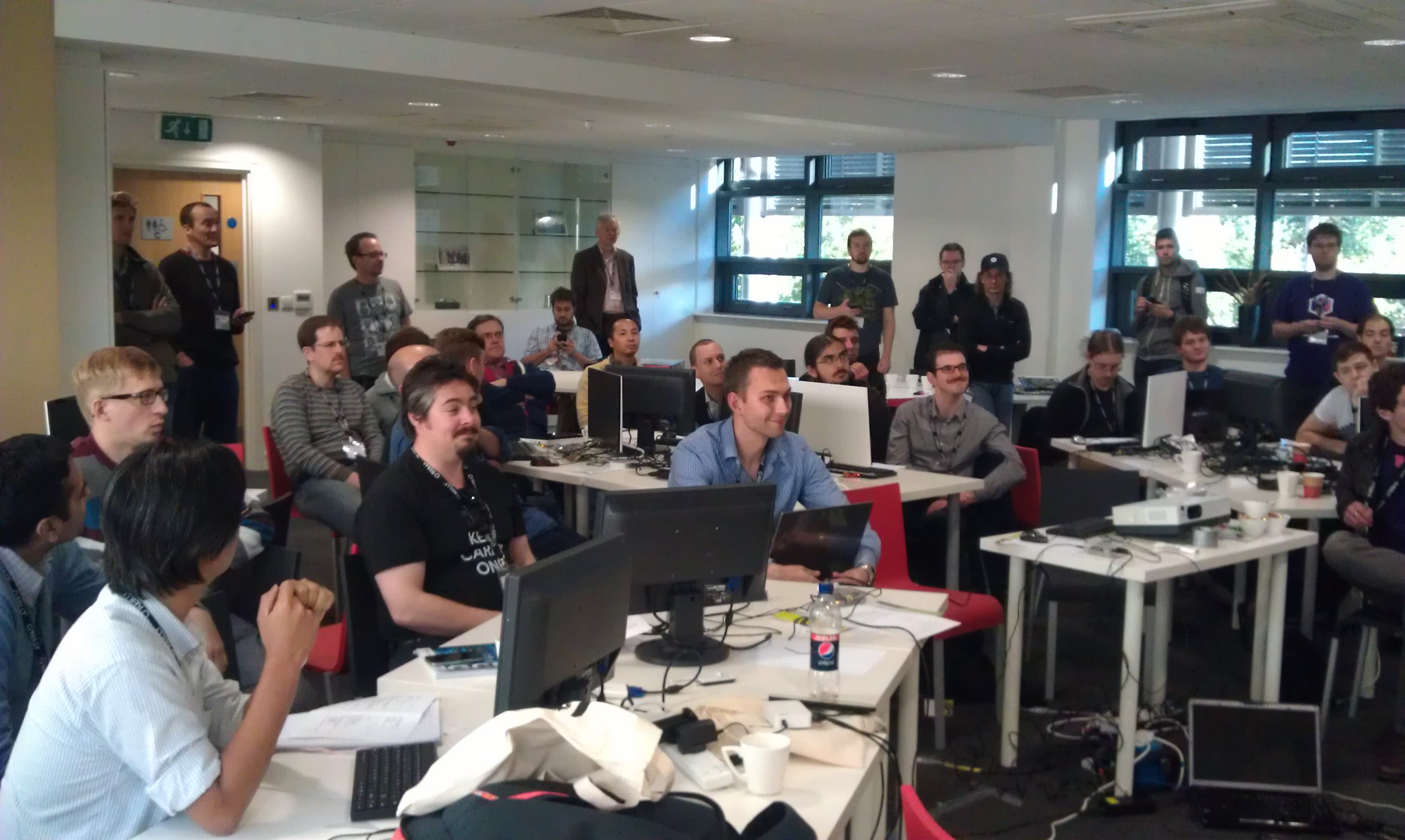 Later in 2013 I went to PyCon UK thanks to a generous offer from Alan O'Donohoe and Nicholas Tollervey. At PyCon UK I worked on the education track for three days. I knew little Python but I helped where I could and this included my old skills as an event organiser (Barcamp Blackpool and Oggcamp) so I made sure that seating, tables, power, equipment were on hand and ready for speakers.

The greatest skill that I have learnt in six years is that failure is a great teacher. You just need to use the knowledge gained from a failure to guide your learning.

There are probably three people who will get that joke...

On October 7 2014 I received an email from Ben Nuttall asking me to visit Pi Towers and run a session at Picademy... Yes my own session! So I spent a few days working out what I could offer and created the genus of "Make things spin"

I originally created the session using Pibrella, a simple LED, buzzer and motor controller. But I quickly migrated to the Explorer HAT Pro.

So here is the basic code...

These lines of code are enough to create so many games, all we needed were some arts and crafts materials and a little imagination.

Using this code I have seen the following from educators. 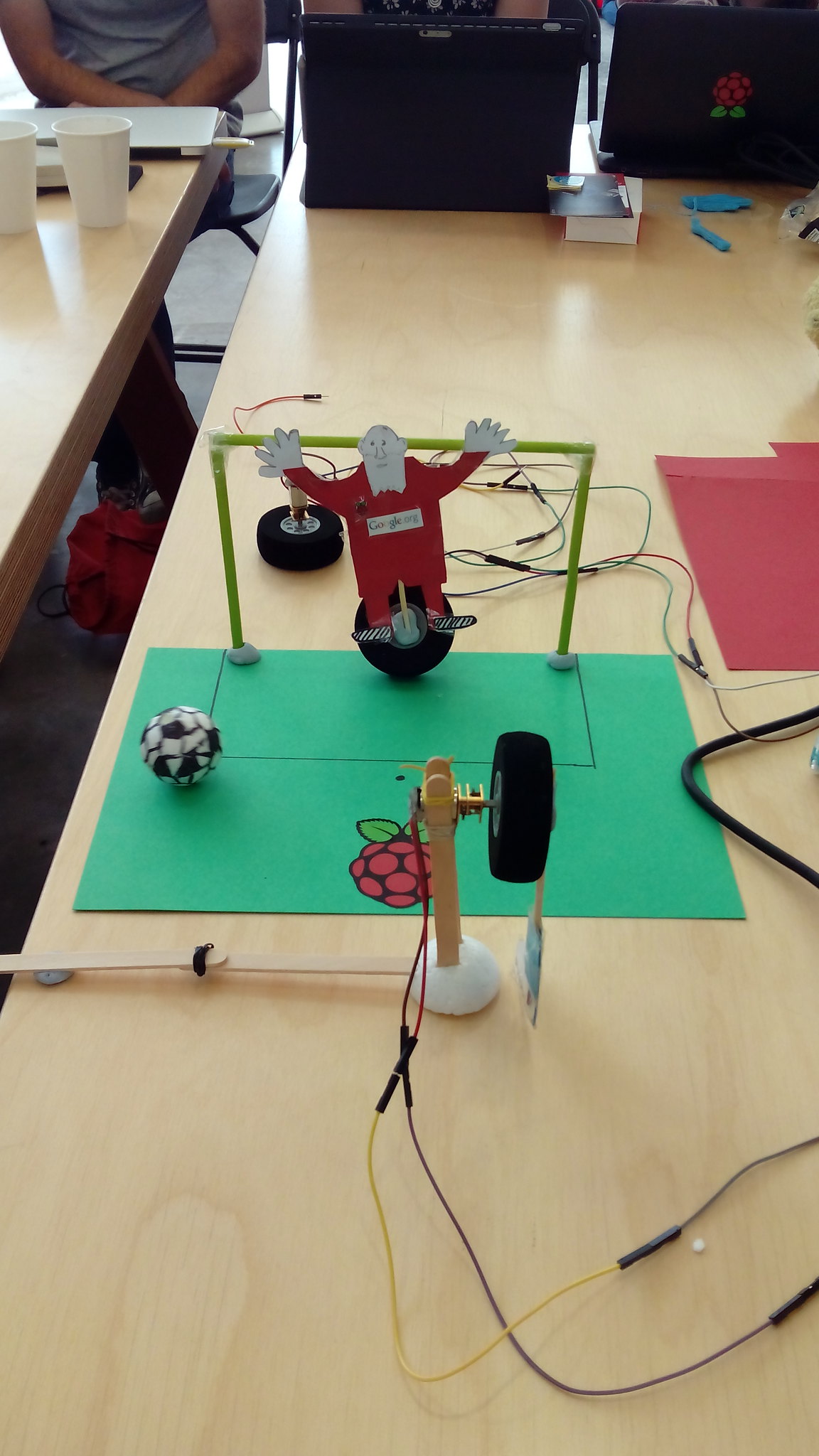 This session has also moved across to Picademy USA and educators there are making fun things that move using code! Humbling to say the least. 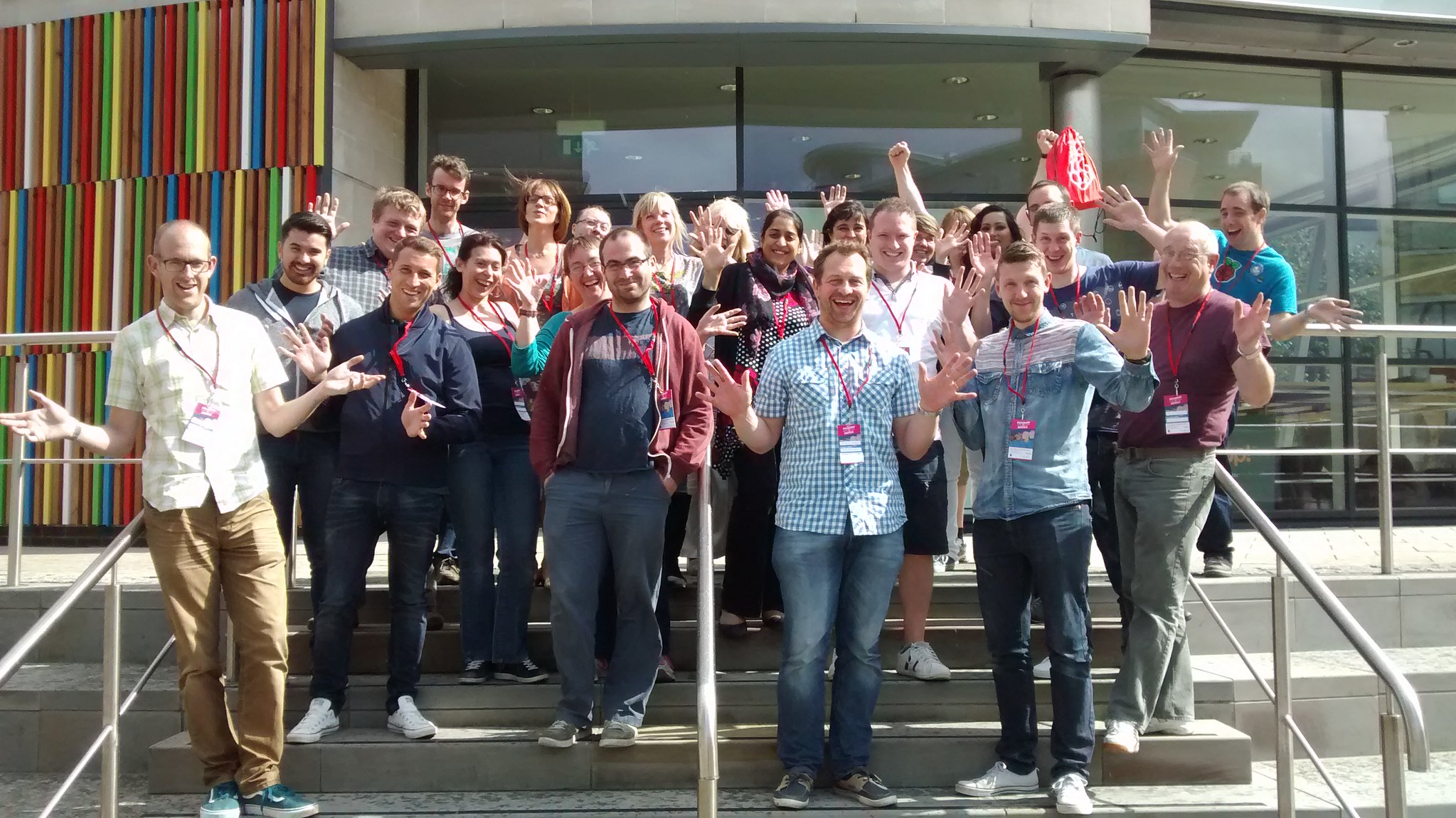 In 2015 I led the first Picademy at Google in Leeds. A joint venture between the Raspberry Pi Foundation and Google. 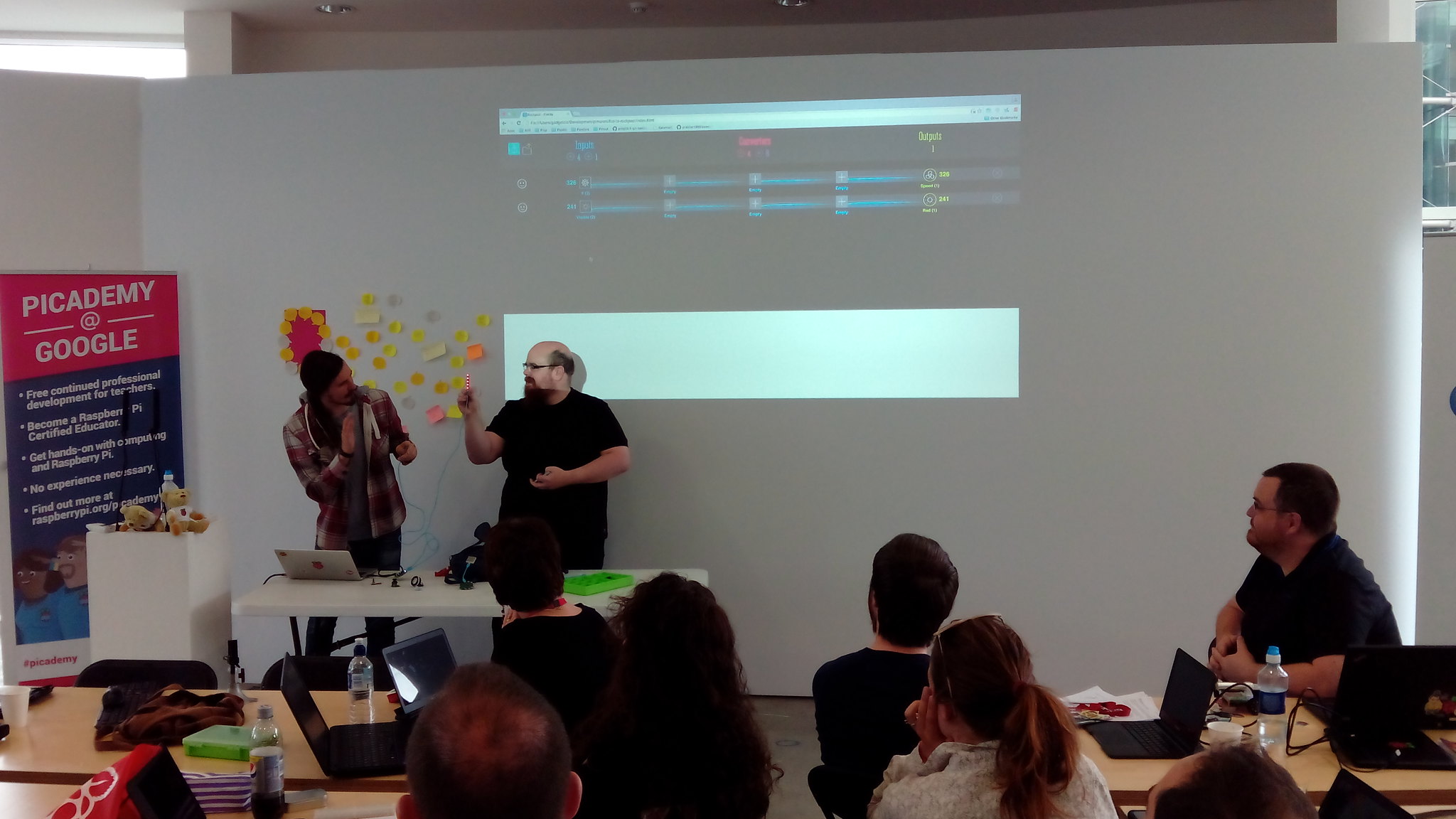 We tested a few ideas, including guest speakers from the industry, notably Pimoroni who brought their team up to Leeds for the day and helped the educators hack new ideas to life. Leeds was the test for future events.

In the years since I have worked at further Picademy events (around 25 I think), until October 2017 when I was officially retired. The Raspberry Pi Foundation now have such a large team and I wish them well with future Picademies.

At each Picademy I made new friends and I am very lucky to still keep in touch with most of them!

What else have I done?

True story, I first interviewed Eben Upton in Cambridge at the very first Cambridge Raspberry Jam in 2012. The interview took place across a pool table and as I was working with an Ubuntu magazine at the time, my questions focused on Ubuntu for the Raspberry Pi.

But what I am the most proud of in my short career are the people that I have met and worked with. From the educators who learnt that failing is not the end of learning, rather the beginning. To the children who have created something totally unique and special. Everyone person I have met has changed my outlook on life.

I've always loved that quote, and yeah I first heard it in Star Trek VI not from Hamlet.

Who knows where I will be in the future, what challenges I may face. I'd like to move into something a little more formal, perhaps help to shape the learning of a nation, advocate maker skills in education, and / or work with others to incorporate coding into the larger picture.

The last six years have been a blast, and I hope to have a few more adventures!

Before I go, some top tips for anyone wanting to be a freelancer.

Above all else, enjoy what you do!

Learn how to use an SD card reader with your Arduino. It isn't as difficult as you may think!

Learn how to use NASA's API and make your desktop beautiful.