Today at Blackpool Makerspace I finally fixed the soldering iron, largely thanks to a video from Big Clive which explained the fault.

So what was the fault?

I still can't recommend this iron, this fault should not have passed QC / QA, but if you have the iron and it has stopped working, well now you can fix it!

Well it seems that after only 8 months and VERY light use, this station has broken down and is no longer heating up. As I am outside the 180 days that eBay states is the returns period, I am unable to return it. But I am in talks with the seller as if they are based in the UK, then I have further rights that I can exercise.
So this review is now moot, don't buy this iron, buy this one from CPC instead

I make it no secret that I love BigClive's teardowns of cheap tech.
Clive takes cheap tech from Poundshops and eBay and tears it apart for a detailed breakdown of how they work and if they are worth purchasing.

Earlier in 2016 he tested a "Hakko" clone soldering station. It looks nothing like a Hakko station, well apart from the colours, but the soldering iron is very Hakko inspired and can even use their tips.

So when Blackpool Makerspace wanted a new soldering station. I remembered this video and so went to eBay looking for a station and I found it on there for only £24 delivered from a UK seller... == INSTABUY!

Well it arrived a couple of days ago, but I was snowed under with work. So just this morning I tested the station by building a simple project, a fan to suck away solder smoke.

Opening the box I found a neatly packed unit with no damage. The packaging had no padding, but everything was ok. 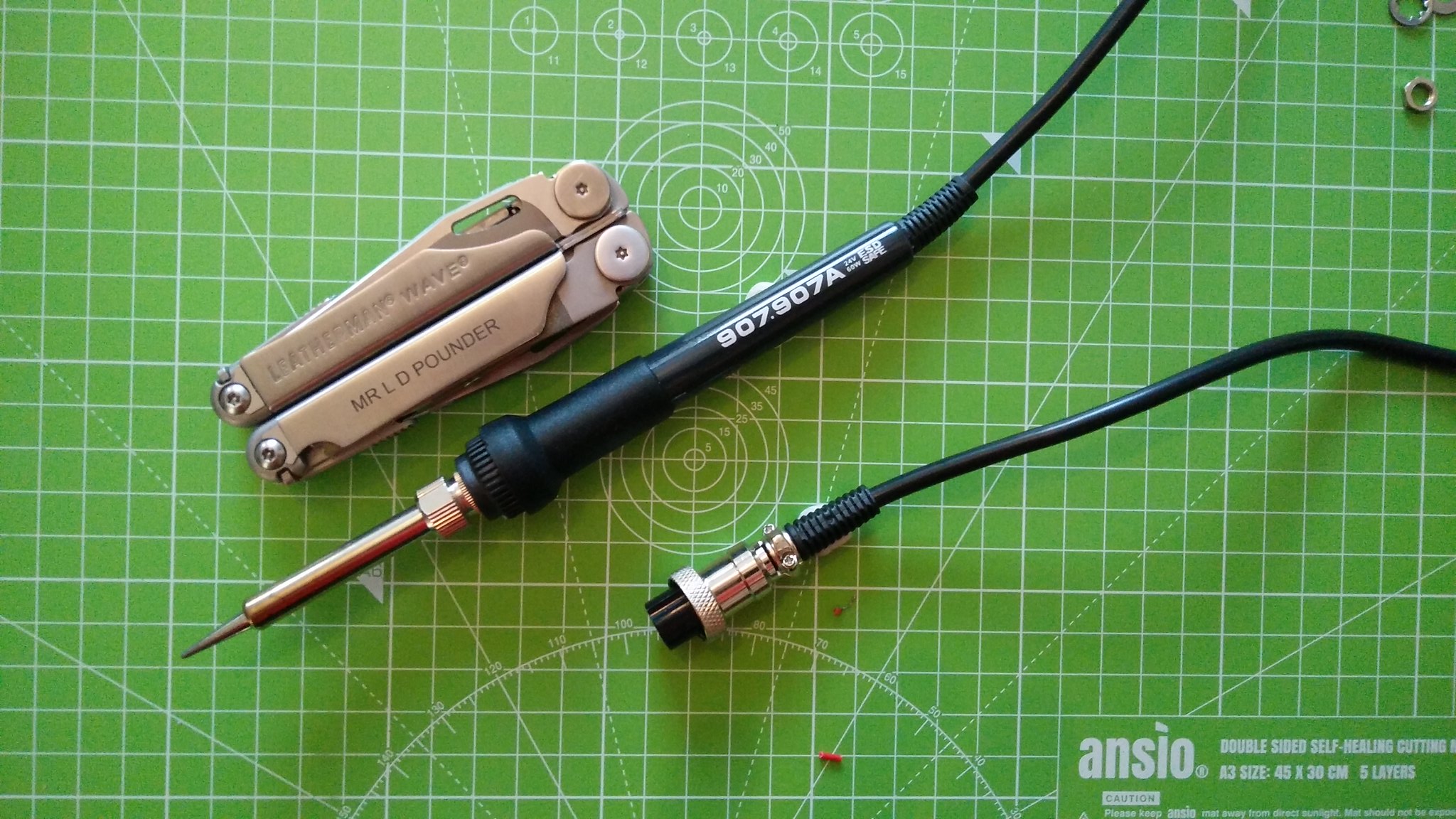 The soldering iron felt great, a silicon feel to the iron and the cable. It connects to the station using a DIN type interface, meaning it fits in snugly and in only one direction. 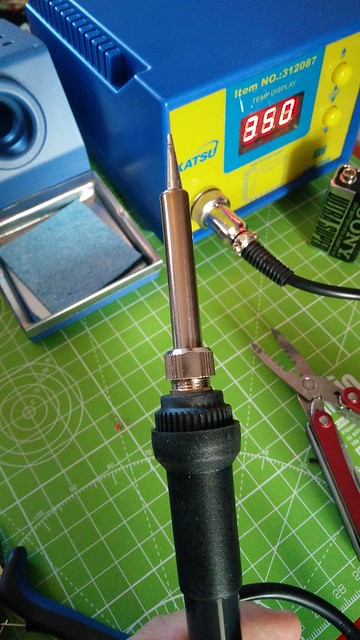 To replace a tip you need to unscrew the collar and remove the sleeve. The station came with some "Hakko" tips of various sizes, handy! 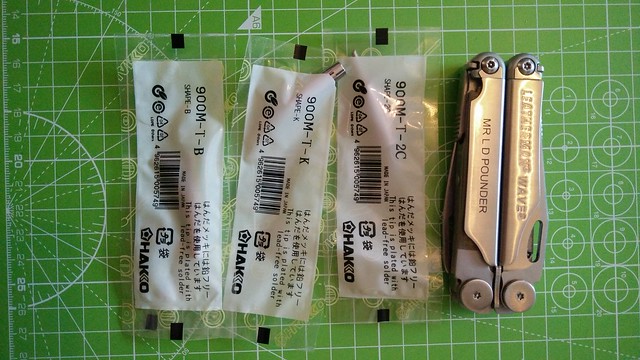 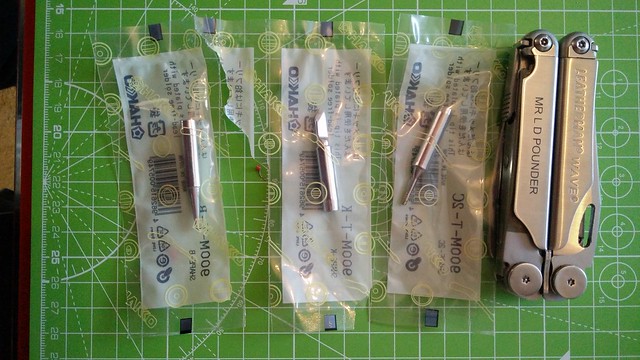 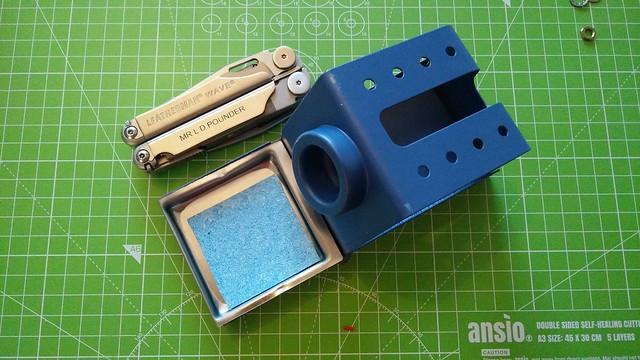 The stand is a standard metal construction with integrated dish to hold the wet sponge. Nothing exciting but it works. It could do with some rubber feet, as you will end up chasing it around the workbench. 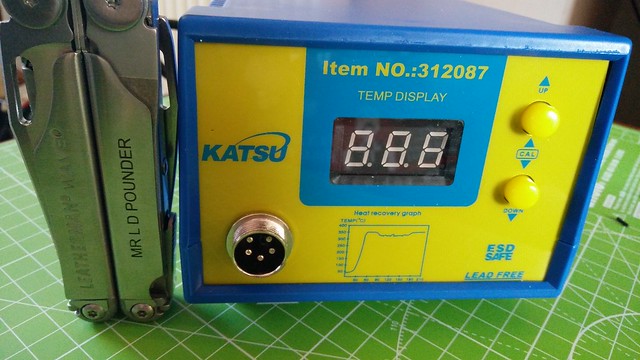 The station has colours that hark to the Hakko range, not for everyone but not offensive.

You can see the DIN connection for the soldering iron. In the centre you can see the display, used for temperature data. To the right are two buttons, up and down. The buttons are used to dial in the temperature that you require, the default is 350c.
As per Big Clive I checked the temp of the iron and found it was a fair few degrees off. So I calibrated the iron by pressing the two buttons and knocked the temp down by 15c, which roughly matched the temperature I measured using my UNI-T multimeter to what the station reported. 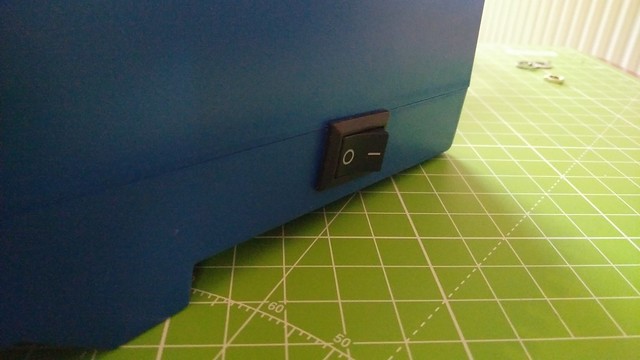 On the right side of the station is the power switch, not exciting but handy! 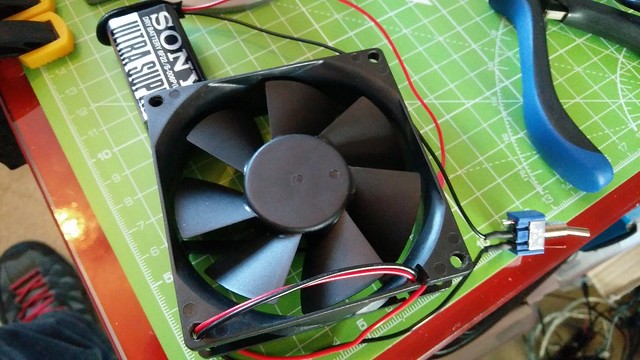 I built a simple project to test the iron, a soldering fume extraction system.

To build it I used

Basically the switch controls the GND connection to the battery and the fan. When open no power flows, when closed the fan comes to life. A simple circuit but a project that has a use!

The iron was set to 350c and I flew through the project. No issues at all! It felt really nice to use and the silicon cable never got in the way!

For £24 this is a great temperature controlled soldering station. It feels nice to use, it is reliable and calibration is super easy. The extra tips are a nice touch, as my Antex soldering iron only came with one tip so I had to but more for £12!

For hackspaces and enthusiasts this is a great purchase. If you are seriously into soldering as a profession then this might do the job, but you may want to look at Hakko / Weller solutions and compare the features vs price. 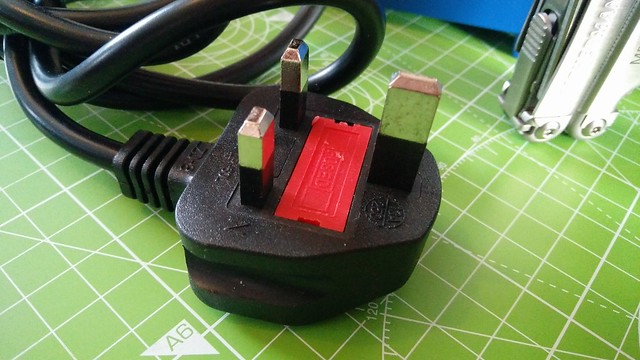 My one issue with the station, and it is an easy fix, the earth pin on the UK plug has a sleeve on it, which is not per BS1363 requirements

A common indicator of a counterfeit plug is an earth pin which is partially insulated. BS 1363 requires that all power pins (the shorter pins) are partially insulated. However, earth pins must be solid brass, or, in the case of plugs intended solely for use with non-earthed devices, solid plastic. BS 1363 is quite specific, clause 12.16 states "Sleeves shall not be fitted to any earthing plug pin." Having a sleeve on an earth pin is dangerous because it can prevent there being any contact to the earth of the socket. To ensure that the earth connection is made as soon as the plug touches the socket many sockets place the contact right at the face plate, this means that continuity is lost as soon as a plug with a sleeved earth is fully inserted!

So when you get your soldering station, put a proper plug on it! 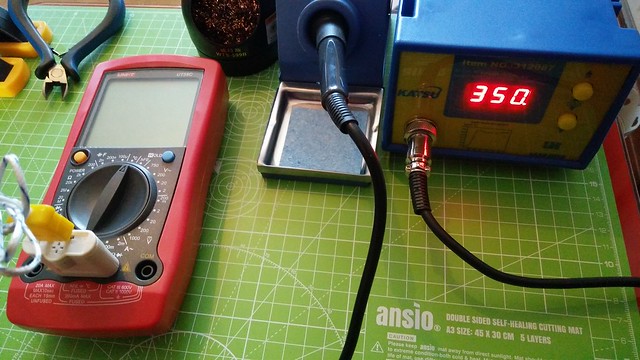 Initially a great iron, but sadly it didn't last the distance and failed in less than 9 months.

Don't buy this iron, get the one from CPC instead

My love of Star Trek is well known and so when I got the chance to play around with Pimoroni's new Mote lights, well there was only one thing to do. Simulate alert