It is no secret that I am a big fan of Lego. From childhood I had buckets of the stuff causing injury to bare feet and being used to build elaborate sets for my Star Wars figures.

Earlier this year I was invited to an event run by Tufts University, School of Engineering and it took place at Lego Education London Hub.

So what is Lego Spike Prime? 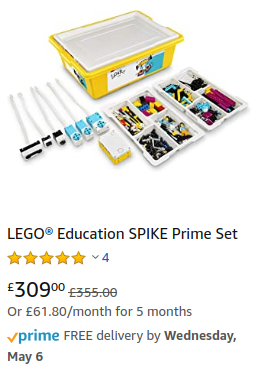 Still reading? Ok the Lego Spike Prime is an electronic building kit. We have sensors and inputs, motors and outputs all controlled by a central hub. 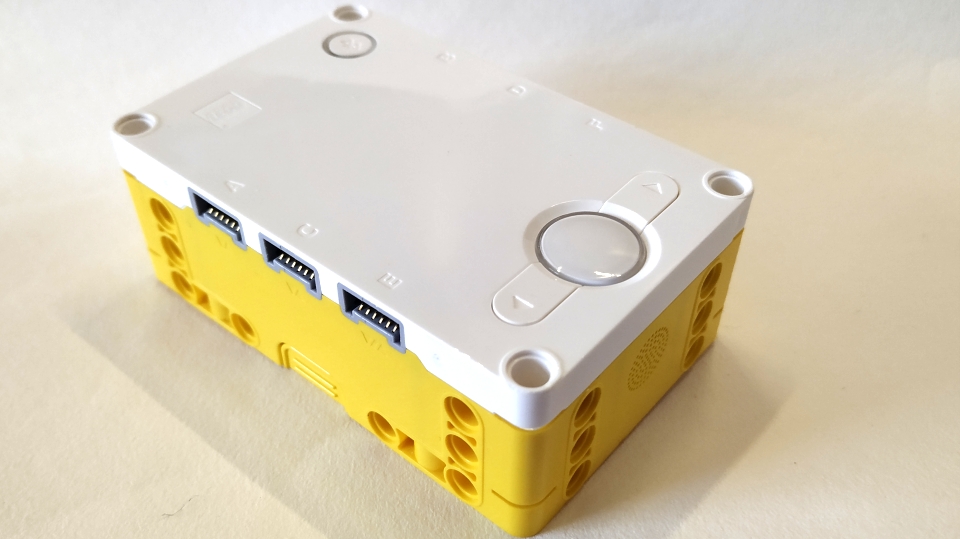 The hub is a smart brick. It is compatible with Lego System and Technic pieces. On the face of the hub is a central button used to power on / off the hub and to select options. This button is flanked by two cursor buttons which navigate through the stored programs. At the top right of the hub is a Bluetooth button, used to connect the hub to a PC using Bluetooth. 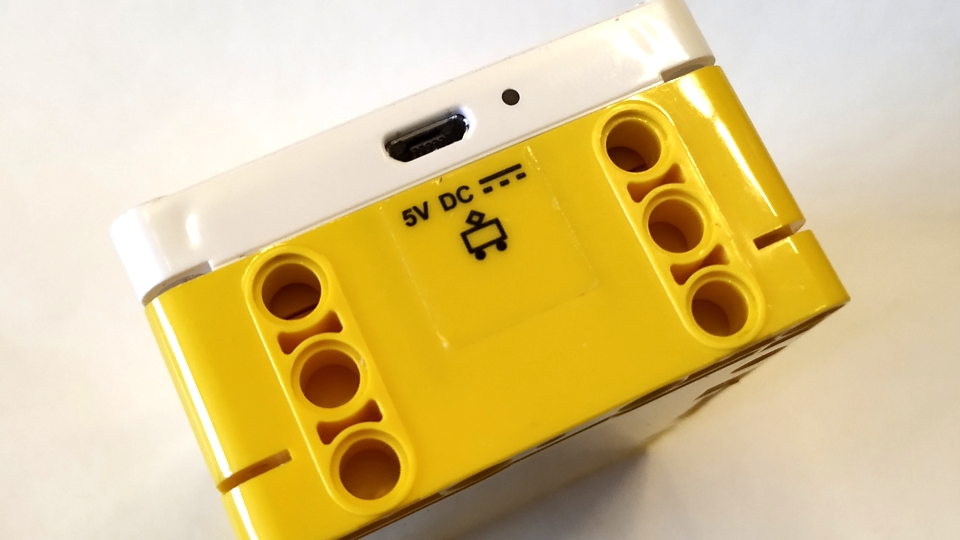 It has a micro USB connector, which is used to charge the onboard battery and to make a physical connection to a PC. 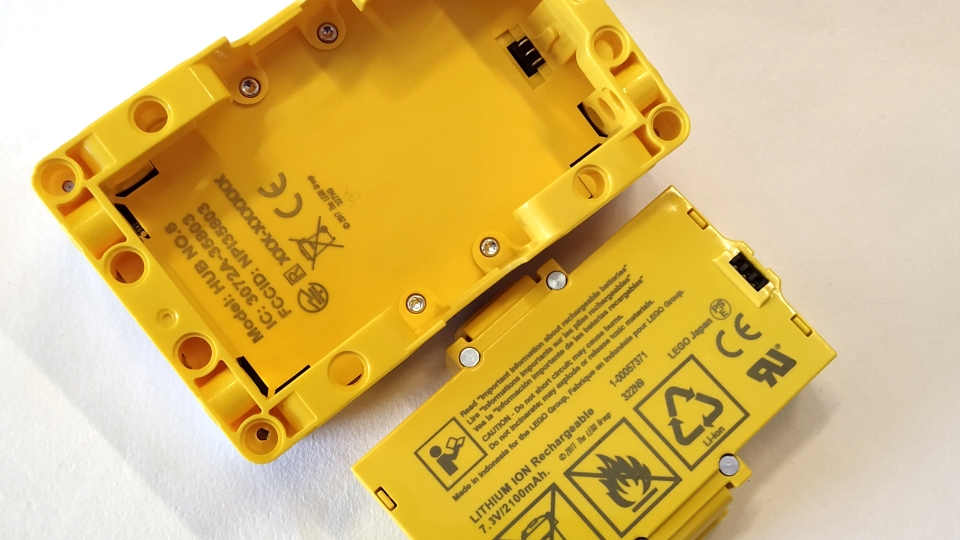 The supplied battery is bespoke and is a 7.3V 2100mAh Lithium Ion battery. 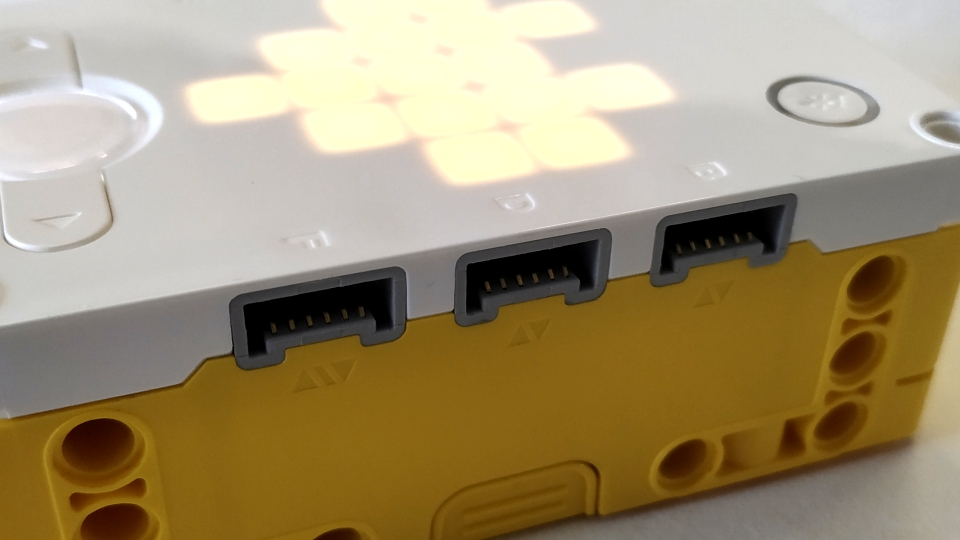 Around the edge of the hub are a series of lettered ports A to F, and these proprietary ports are used to interface with Lego branded input and output devices.

The hub can be used as is with the accompanying inputs and outputs, offering a zero code option for younger hackers.

What inputs / outputs are in the box? 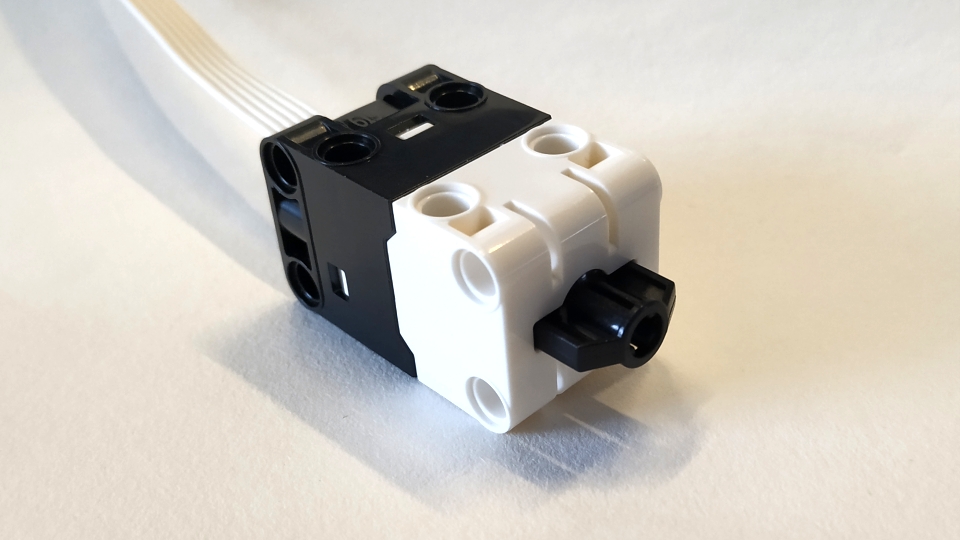 A force sensor (nothing to do with Jedi!) that is used to measure the amount of force placed upon the plunger. 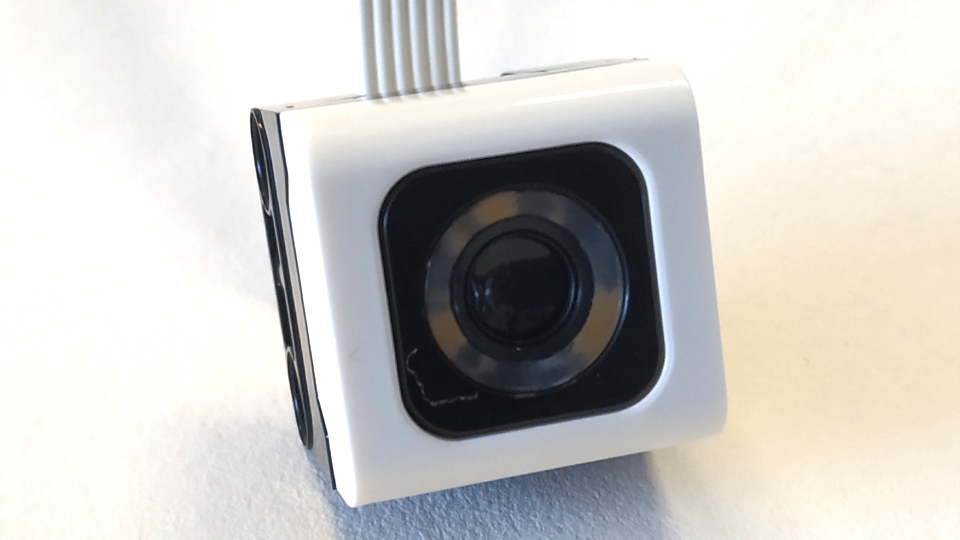 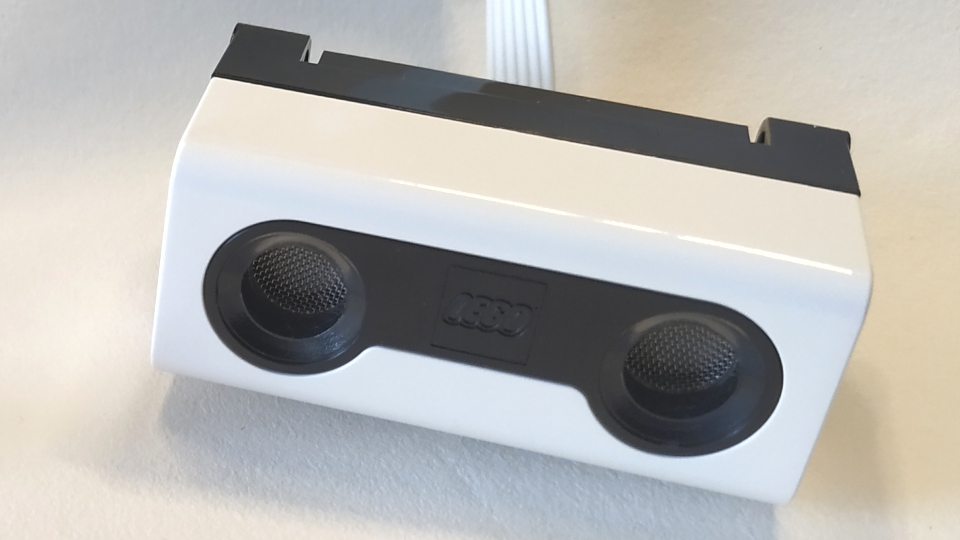 Also inside the hub we have

For outputs we have... 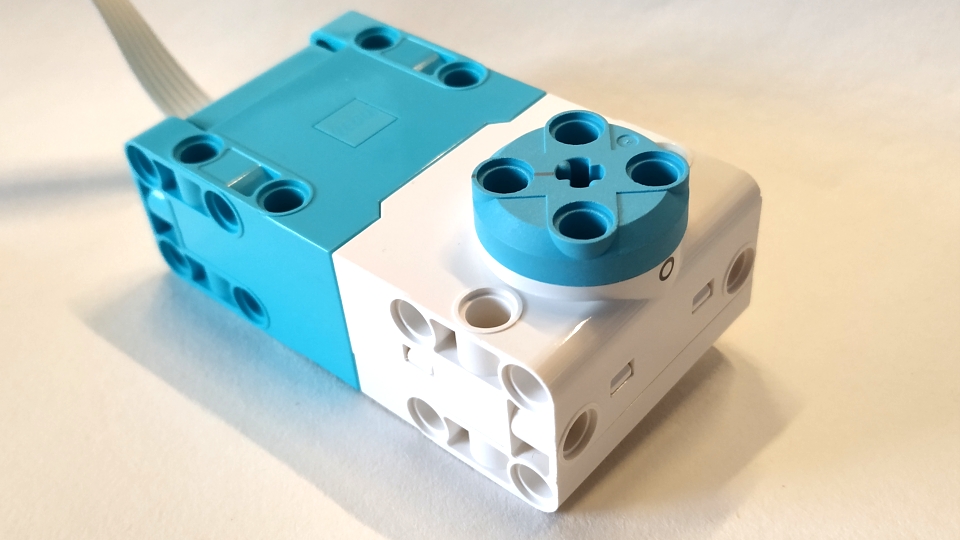 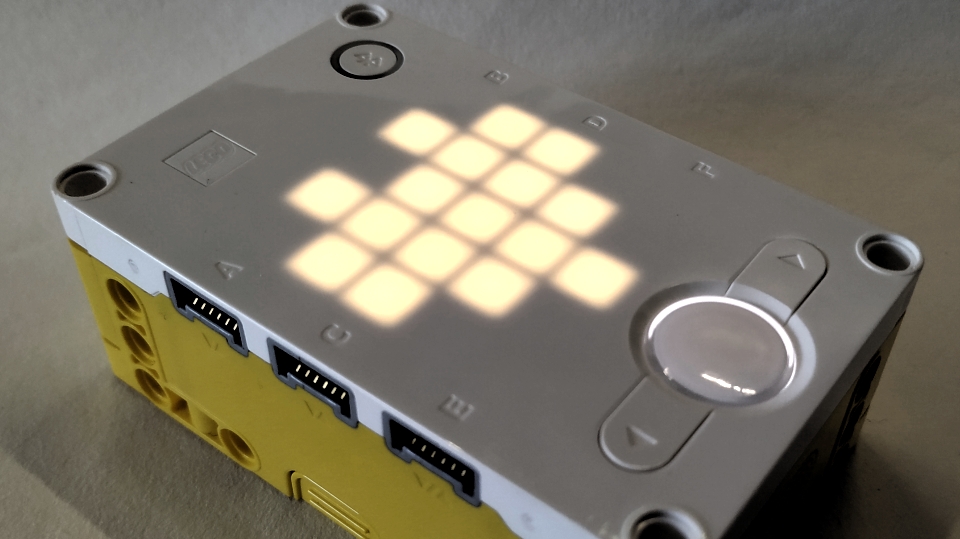 The hub also has a 5x5 LED matrix, which can show simple images, and scroll text. The central button can also change colour. There is also a small speaker in the hub that can make simple beeps and play notes. 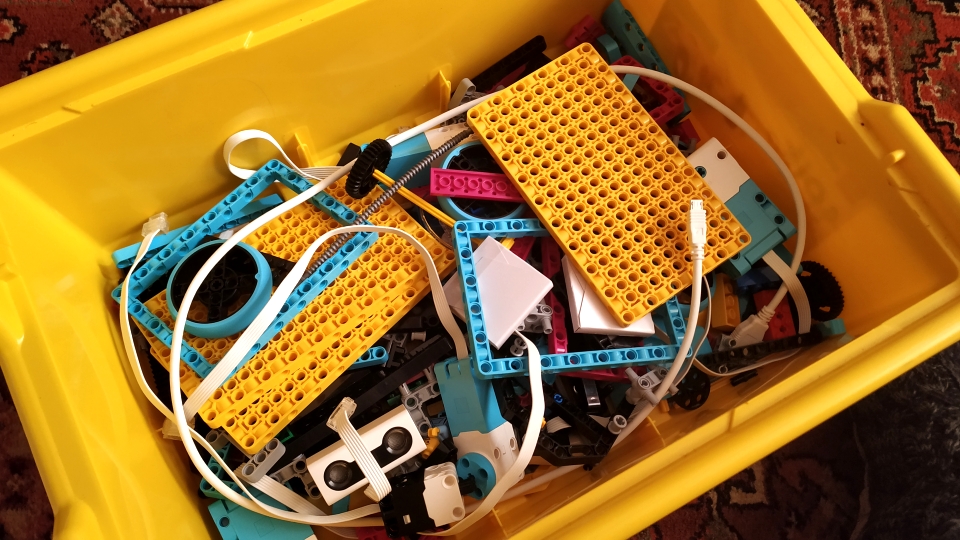 We also get a load of Lego bricks and Technic pieces, including many new pieces and colours.

Lego has their own Spike Prime app, and it works really well. It feels just like Scratch 3.0 and so younger hackers will be right at home.

The Lego Spike Prime app also provides a means to read the hubs onboard sensors.

How did I test it? 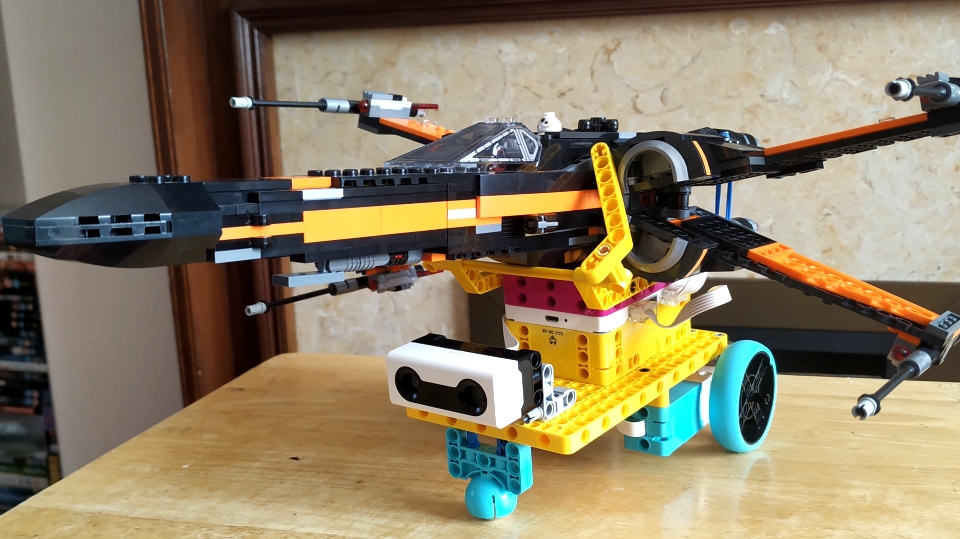 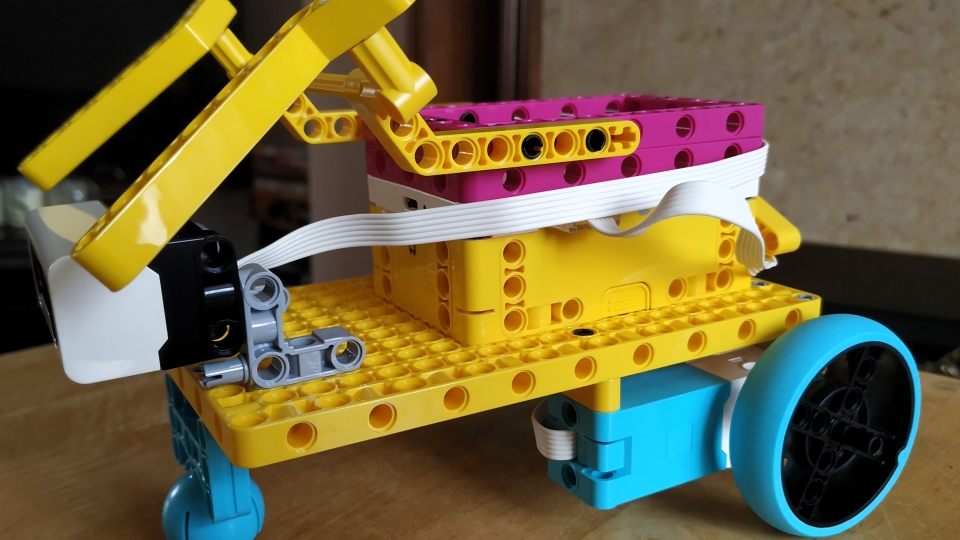 I made a robotic frame to fly my X-Wing! 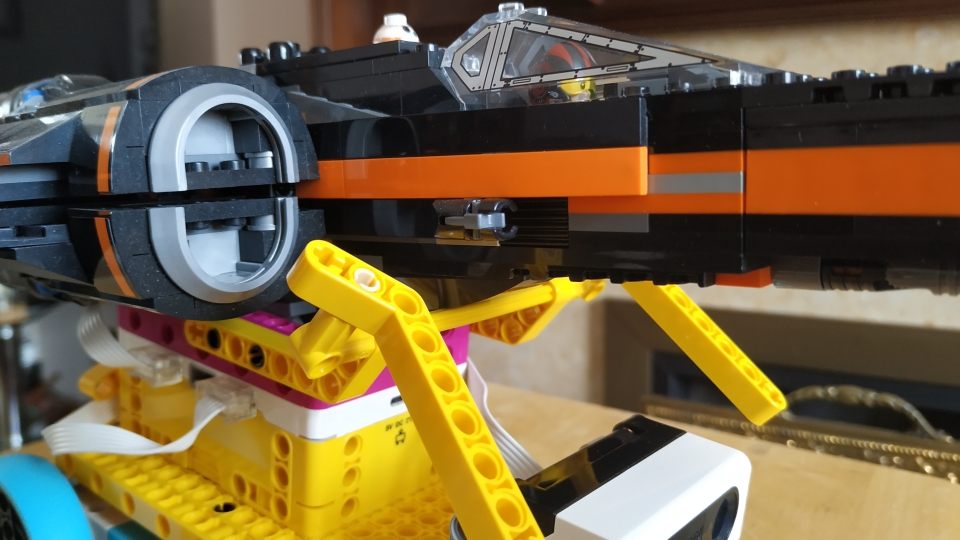 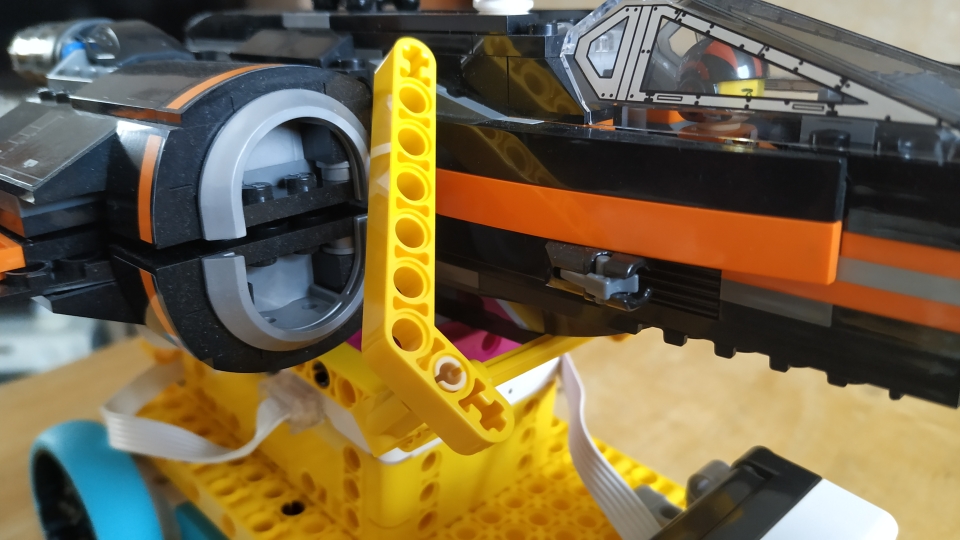 The yellow clips lock and hold the X-Wing in place. 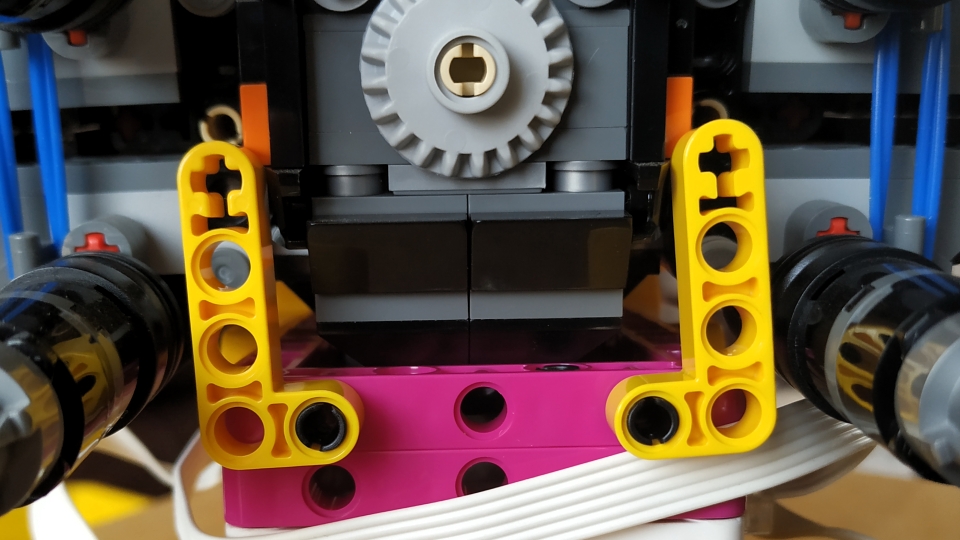 There are two small clips on the rear to stop it from shaking out. 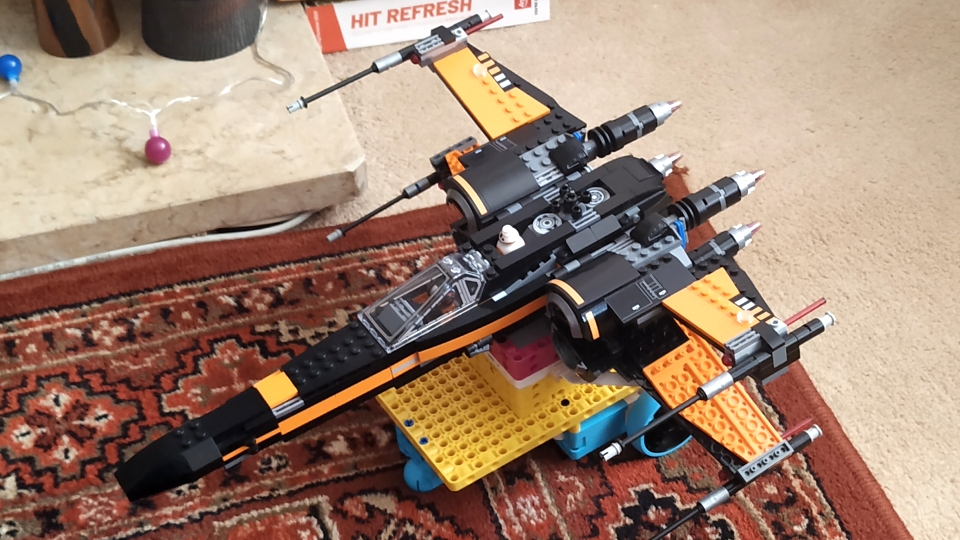 I then took it for a spin, writing code on my laptop and sending over to the hub via Bluetooth.

So here is a not so secret, secret. The Lego Spike Prime runs MicroPython as standard! I used tio to open a serial console and directly access the hub.

Tio?
"tio is a simple TTY terminal application which features a straightforward command line interface to easily connect to TTY devices for basic input/output." - tio website.
I covered this great tool back in January 2020, here is the blog post

The Hub is identified as a LEGO Technic Large Hub with STM32F413xx which is a Cortex M4 unit running at around 100MHz. Flash memory is approximately 1024Kb to 1536Kb, and there is 320Kb of SRAM. I need to do a little more digging around to fully figure this out.

I was then able to send a simple command to show @biglesp on the LED matrix.

I did a little digging around on the hub and here are the built in modules.

Interesting to see that we have modules for working with JSON, time and direct access to the machine.

The most useful module in the group is hub and this offers us direct access to the inputs, outputs and built in sensors of the hub. Here we can directly control everything via the MicroPython REPL.

So by importing the hub module.

We can control the LED matrix, for example to show "@biglesp"

Using import os and running print(os.listdir()) I can see these files.

Can I access the files? Well not as a standard USB device. Rather I have to access them via MicroPython. It would be awesome to edit the boot.py and main.py files and write code in MicroPython that would survive a reset.

So how can we use it?

Right now the only option is to send commands, character by character to the hub using serial. Not the best way, but it is all we have.

In this video I use that technique with Anvil, a tool to make web applications using Python, to send a command to spin up both motors and fire off a Lego brick. I demoed this at the Tufts University workshop and was able to control the motors from my mobile device.

I will investigate a better approach, but in the meantime I shall create a simple wrapper using Python functions so that anyone can control the hub using simple Python.

Fancy customising your Grub menu? Want a cool image to greet you as you power on? Then this is the tool for you.

Are you a Jedi or a Sith? A smuggler, bounty hunter, princess, droid, wookie, or stormtrooper? With a little Scratch coding we will soon find out!