On Friday 9th September I finally got my hands on the Nexdock, a recent crowd funded project that I backed.

Nexdock is a laptop with no hard drive, CPU, memory. Just a keyboard, screen, trackpad and a 10000mAh battery. The goal of the project is to create a platform where the user brings their own device, be it a phone, tablet...RASPBERRY PI ;) and connects it to the Nexdock which will provide the keyboard, mouse, power and screen for us to work with.

So what does the Nexdock come with

Wondering why the last five entries in the list are bold? Well dear reader these four devices are available if you plug in a USB A Male from the left hand USB port to the USB port of a Raspberry Pi, so you need a USB A Male connection on each end of the cable.

Mike Redrobe has created a handy block diagram of the connections.

The webcam is nowhere near the resolution of the official Raspberry Pi camera, but it is there and ready to use. To test the camera I installed fswebcam via the terminal.

Then to take a picture I typed

And behold this glorious image on a Sunday morning. 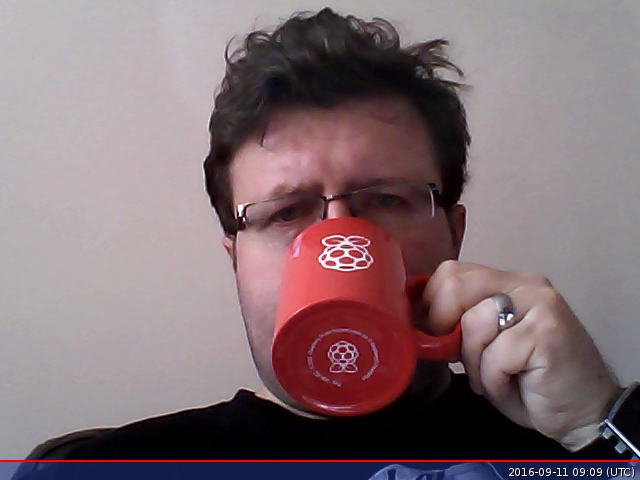 Admittedly not a great picture, for more than one reason! But it worked and it can be used with Python's PyGame library, Albert Hickey aka @winkleink has even written a test script for generic USB webcams

Not too exciting, but I tested the micro SD card reader with a spare card, and it worked! So now I can add extra storage...and even clone cards with my Raspberry Pi!

I plugged in my headphones, forgot to change the audio output, loaded Sonic Pi and played some tunes...and I heard it all..clearly...no hissing from the PWM audio output!

I remember using a Zoom H2 microphone with the original Raspberry Pi, it worked but was buggy. Fast forward four years, more power and better software means that we can now use microphones with the Pi. So I tested the Nexdock internal microphone using Audacity to record some basic audio.

Recorded at 48khz in mono, the microphone would not record in stereo.

There are two speakers on the underside of the Nexdock. They are of fair quality, certainly not Bose quality but they are good enough for the job.

The Raspberry Pi was never the target market for this project, so the choice of Bluetooth as the method to connect the keyboard and trackpad to the Pi is never perfect. Requiring a few steps of configuration to get working, including writing a cron job to auto connect them on boot is not pleasant for those new to the Pi. Also when playing Minecraft you are not able to move the camera view and walk at the same time as they cancel each other out. But for general use they are ok.

Want to make your trackpad more responsive? Open the Keyboard and Mouse settings and change the pointer speed so that it runs a little quicker than normal.

A cheap generic 5v 2.5A power supply comes with the Nexdock, and it even comes with a "DEATH-DAPTOR" (c) BigCliveDotCom.

In other words a universal adapter that has no place in your home.

Get yourself a better adapter before you use the Nexdock!

I've just ordered a power supply from CPC, many thanks to Ivan @Piminister for investigating.

I'll test it and report back!

Update September 19 2016
Power supply has arrived and is charging the dock with no issues. I suggest that this is the power supply to pick up to replace the DEATH-DAPTER :)

Well I need to charge the unit up and run it continuously to test how long the battery will last with a Raspberry Pi 3.

I ran the unit continuously for 6 hours at Leigh Makerspace Raspberry Jam, no issues encountered, but a proper test is still required.

Oh and I had a strange issue with the screen earlier today. It went off, then started to go weird. But after a reboot all was ok. Fingers crossed.

Disclaimer - This kit was provided free of charge by CPC I love soldering! I only learnt to solder about 2-3 years ago, but since then I have enjoyed the hobby. Yes even